When Will Valuations Begin to Rise Again?

With a potential debt-ceiling debate looming in the fall and further tightening actions by the Fed on the horizon, Ten-X’s Peter Muoio would not be surprised if prices continue to meander, he tells GlobeSt.com.

IRVINE, CA—With a potential debt-ceiling debate looming in the fall and further tightening actions by the Fed on the horizon, Ten-X’s chief economist Peter Muoio would not be surprised if prices continue to meander, he tells GlobeSt.com. The firm recently reported in its Nowcast that the commercial real estate sector continued its pricing slump in July, with nationwide commercial pricing declining by 0.3%.

The decrease marks the third consecutive month of contraction for Ten-X’s monthly pricing index, which remains in the doldrums as the market struggles to adjust to rising interest rates and a lack of clear direction in federal policy, according to Ten-X. Despite the prolonged slump, pricing across commercial real estate remains 8% higher than in July 2016.

We spoke with Muoio about the declines, whether he sees this trend continuing and what might either exacerbate or offset/reverse these declines.

GlobeSt.com: What is your overall view on the property-pricing declines the market has been experiencing?

Muoio: As investors have searched for yield in a low-interest-rate environment, US property prices have been on a long, strong upswing—in some instances, beyond what fundamentals suggested. The current reaction of pricing reflected in the Ten-X Nowcasts is not surprising, as it follows the jump in interest rates on the heels of last November’s election and heightened policy uncertainty. Additionally, there is general concern that the cycle has been a very long one and may not have much room for continued growth, so there is increasing uncertainty about how it will play out from here.

GlobeSt.com: Do you see this trend continuing, and if so, for how long?

Muoio: I think the key factor in answering that question is whether the outlook for policy will be clarified in the near term and how smoothly the market reacts to any further Fed actions. At this moment—with a potential debt ceiling debate looming in the fall and further tightening actions by the Federal Reserve on the horizon—I would not be surprised if prices continue to meander.

GlobeSt.com: What factors could either exacerbate or offset/reverse these declines?

Muoio: In terms of getting pricing moving up again, some policy clarity from Washington would be helpful. In addition to the debt ceiling, we are only at the start of discussions on potential tax-law changes, and depending on how that plays out, it could have positive or negative impacts on commercial property pricing. The Fed is moving toward slowly starting to unwind its bond holdings built up during its quantitative easing, and while this does not look likely to disrupt the capital markets, it is another question mark for the fall. Economic growth remains on track despite all the issues buffeting it. However, any signs of cyclical downshifting would exacerbate the situation.

GlobeSt.com: What else should our readers take away from this Nowcast?

Muoio: I would really watch the apartment Nowcast in coming months. Until July, it seemed to be impervious to the headwinds hitting the other property segments, despite a downshift in its fundamentals growth in recent quarters. However, I have always been cautious about reading too much into a single data point of any kind, so it will be interesting to see if this was an aberration or the start of a shift in direction. 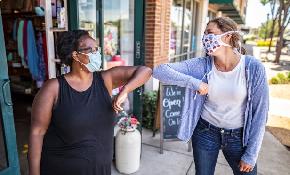 “A New Together Again” Entices Shoppers to Shop Local, Safely and Now

As Texas retail slowly re-opens for business, “A New Together Again” will encourage shoppers to patronize Weitzman centers and tenants through an emphasis on community, safety and human interaction.