“Tenants aren’t using office space the same way they were when BOMA International released its last office standard, and amenities like rooftop gardens and balconies are becoming much more common.”

WASHINGTON, DC–Balconies, covered galleries and finished rooftop terraces that are for the exclusive use by a tenant may now be included in the rentable square footage calculation. That is one of the updated standards the Building Owners and Managers Association has made in its latest update to its floor measurement standard for office buildings, BOMA 2017 For Office Buildings: Standard Methods of Measurement. BOMA released the update this week. The last time this guide was published was in 2010, and a lot has changed since then — including the now very popular amenity of an exclusive rooftop terrace.

BOMA has been setting floor measurement standards for more than one hundred years, starting with the publication of the first “Standard Method of Floor Measurement”” in 1915. Today its measurement standards have expanded to include industrial, multi-unit residential, retail and mix-used properties, as well as a standard for measuring gross areas of a building.

Other changes in the BOMA’s 2017 Office Standard include: 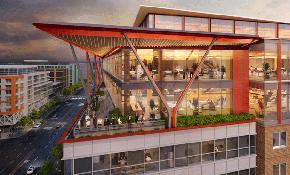 The firm is set to begin construction on a 105,000 SF development atop a DC building; serving as the city’s first commercial office property to utilize mass timber construction.