“One of the points that Governor Hogan brought out was that there are going to be 21 stations along the Purple Line, and when I asked him about opportunities for real estate development over the next few years, he said that the audience ought to focus on where the state is investing its money.”

On transportation and the Purple Line

One of the topics that we concentrated on was transportation, and that is particularly critical to the future of development in this region. We talked about the Purple Line and how investments in that transportation system could lead to additional development in the region, commercial real estate development. One of the points that Governor Hogan brought out was that there are going to be 21 stations along the Purple Line, and when I asked him about opportunities for real estate development over the next few years, he said that the audience ought to focus on where the state is investing its money.

If the state is investing taxpayer dollars in transportation systems — whether that’s the Purple Line, or whether it’s an expansion of roads and exits along the beltway or 270 or the Baltimore Washington Parkway, or whether it’s the Hyperloop, which is something that they’re not investing public dollars in just yet, but has given an authorization to begin building between Baltimore and Washington — I think that that is a place where the private sector should consider additional development because as we know, transportation is critical to getting people from home to work and back.

On regional collaboration and the Metro

Regional collaboration has been an enormous challenge for our region and it really puts us at a competitive disadvantage when we cannot collaborate in the same way that, say, the several counties around the Denver metro area can collaborate, or around the Austin metro area, other places that have high-tech workers, but don’t face the same kind of cross-border challenges that we face in our region with so many different jurisdictions. 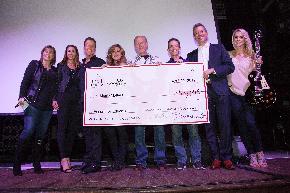 Encore for Education to Feature Fitz and the Tantrums, Raise Funds for Music Programs

Since inception, Encore for Education has raised more than $805,000 for Music Matters and this year’s concert will feature LA-based Fitz and the Tantrums.

The real estate firm has launched the $125 million Affiliated Housing Impact Fund to invest in workforce housing in Florida.