PHOENIX-Fresh from a winning battle over control of the company, the executives in charge of retirement community developer Del Webb have some strategic changes in store for the 40-year-old company.

The 40-year-old Phoenix-based home building company is starting an infill project in Chicago. The company already has a Sun City just outside the city, but plans to develop a community closer in. Traditionally, Del Webb has bought large tracts on the outskirts of cities and attracted retirees with golf clubs and lavish amenities.

Approximately 80% of retirees don’t plan to move more than few miles from their current homes, which means that for Del Webb to tap that market the company will have to build in the Midwest and Northeast.

Del Webb has also cut down on its debt load by reducing its staff. The company has a staff of 4,576 employees nationwide, which is 762 less employees than the firm had just a year ago.

A number of groups have purchased more than 5% holdings in Del Webb and are waging a takeover battle. The latest ended Nov. 2, when Hanneman prevailed in the proxy squabble with J.F. Shea Co., Shea Homes, for seats on Del Webb’s board. Phoenix-based Pacific Parnters LLC also owns more than 5% of Del Webb. 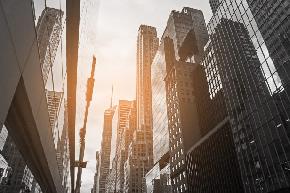