GREENBURGH, NY-LCOR Inc., a partner in the ownership of The Landmark at Eastview complex here, reveals it has begun marketing 320,000 sf of new office/laboratory space after receiving final site plan approval for its $130 million development.

GREENBURGH, NY-LCOR Inc. will begin marketing 320,000 sf of to-be-built space at its Landmark at Eastview complex here. In addition, the owner of the Landmark complex is in negotiations with Madison Square Garden on the sale of 15 acres of land at the site that will be utilized for a practice facility for the New York Knicks, New York Rangers and New York Liberty sports teams.

LCOR, headquartered in Berwyn, PA, is a partner in the ownership of the 280-acre campus, Eastview Holdings LLC. Peter Gilpatric, senior vice president of LCOR, tells globest.com that the firm recently received final approvals from the town of Greenburgh on its site plan application for the 320,000 sf of new office/lab space at Landmark at Eastview. The town of Greenburgh also issued final site plan approval for Eastview Holdings’ application for a 125,000-sf practice facility for the Knicks, Rangers and Liberty franchises.

At press time it is not known when construction might start on that facility. Sources familiar with the deal say that Eastview Holdings is in negotiations to sell a 15 acre parcel to Madison Square Garden, a subsidiary of Cablevision for the training building.

Paul Feiner, supervisor for the town of Greenburgh, notes that the Greenburgh Town Board approved the two site plans on Oct. 2. Commenting on the training facility proposal, Feiner relates, “This is a win-win win for everyone. The town will benefit because there will be lots of prestige, additional tax revenue and little traffic from the new facility. We’re honored that Madison Square Garden has decided to make Greenburgh one of their homes. The construction should be complete in August 2002.”

Officials with Madison Square Garden refused to provide any firm details on the pending land sale and when it might begin construction. In a prepared statement, the organization confirmed that it was “pursuing a very attractive site in Greenburgh, NY We believe this site is an excellent location for our practice facility.”

At present, the Rangers hold practice at Rye Playland, the Knicks at SUNY Purchase and the Liberty split time at Chelsea Piers and Madison Square Garden.

Gilpatric notes that LCOR is in discussions with prospective tenants for the new 320,000 sf of space at the Landmark at Eastview, which will be contained in three buildings of 100,000 sf, 100,000 sf and 120,000 sf. Currently, The Landmark at Eastview features approximately 725,000 sf of existing space and is 100% occupied, mainly with biotech and pharmaceutical firms such as: Regeneron Pharmaceutical, Emisphere Technologies, OSI Pharmaceutical and Progenics Pharmaceutical. In addition, Lockheed Martin, C.K. Witco and Praxair also lease space there.

While talks are being held with prospective tenants, Gilpatric would not comment on whether any deals were expected to close in the near future. He did say, “In a perfect world I would like to get a lease done and then begin construction in about a year.” He adds that the development of the project will be tenant-driven and that LCOR, will be seeking to tap into the state’s Gen*NY*sis (Generating Employment Through New York Science) biotech funding program. Landmark at Eastview joins New York Presbyterian Hospital and the Westchester County Health Care Corp., which includes the Westchester Medical Center and New York Medical College, in seeking Gen*NY*sis funding for proposed biotech developments in the county. 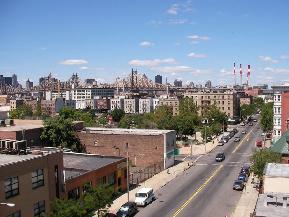