OAK BROOK, IL-Faced with a jump in vacancies in its Midwest suburban office portfolio and a dearth of new investment opportunities, Great Lakes REIT is doing what many other property owners are doing – refinancing debt. Chief Financial Officer James Hicks says the company has received a commitment from an insurance company for five-year, 6.65% fixed-rate financing on $23 million of its debt, and expects to close in early December.

The time was right to capitalize on “extraordinary low short-term interest rates,” Hicks says, adding, “The temptation we’re faced with, these short-term variable rates won’t last forever. I don’t think anyone could honestly say interest rates will remain at these levels for the foreseeable future – although we wish they would.”

Meanwhile, Great Lakes watched its occupancy rate fall from 90.5% at the beginning of the third quarter, when it bought the 202,218-sf Bannockburn Corporate Center in that Lake County suburb, to 88.1% at its end. Although the REIT is doing better than the overall market, its occupancy challenge is not getting any easier in the fourth quarter, adds president and COO Pat Hunt. Great Lakes lost lease deals covering 90,000 sf in the last 60 days, he says, which represents 1.5% of the REIT’s portfolio. “These were deals that had been agreed to on the basis of economic terms,” Hunt adds.

With 1.23 million sf of leases – 23% of Great Lakes’ portfolio – expiring in 2002, the REIT’s regional leasing managers have been freed from administrative duties to focus on leasing space, Hunt says. That space is being priced aggressively, he adds, with incentives being offered to leasing brokers.

“We think we’ve made progress on early renewals,” Hunt says. “One trend we’ve noticed is tenants are more likely than not to stay in their current space due to the current economic conditions. We’ve been getting more calls from tenants, who six months ago said they would move out to expand and grow their business, and now they’ll retain their space.”

Great Lakes president and CEO Richard May says although deals are few and far between, the current environment provides buying opportunities similar to 1993, when the REIT first went public. Properties are on the market at capitalization rates of 10.5% to 11%, with 90% occupancy levels and at 75% of replacement cost, he notes.

“I’d rather be buying that selling right now,” says May, adding Great Lakes stock is trading at 6.8 times funds from operations, its lowest level ever. 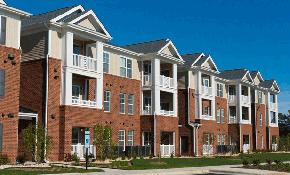 The firm has expanded its platform by launching a multifamily property management group.