WESTWOOD, CA-Spyglass Entertainment, producers of movies including “The Sixth Sense” and “Seabiscuit,” has signed a long-term lease to move the film production company’s offices from Burbank to new quarters at Murdock Plaza, according to Cushman & Wakefield.

The film production company has signed for 17,500 sf in the 17-story, 220,000-sf building at 10900 Wilshire Blvd. in a lease brokered by Anthony Gatti and Jerry Hess of Cushman & Wakefield, who represented building owner 10900 Wilshire LLC.

Gatti and Hess say that Spyglass will occupy the entire 10th floor and a portion of the high rise Murdock Plaza, which is one block west of Westwood Boulevard. Spyglass Entertainment was founded by co-chairman and chief executive officers Gary Barber and Roger Birnbaum. The company develops and finances all of its projects independently.

Terms of the Spyglass lease were not disclosed. Published asking rates at Murdoch Plaza range from $2.90 to $3.25 per sf per month. The film company was represented by Les Small of Les Small & Co. 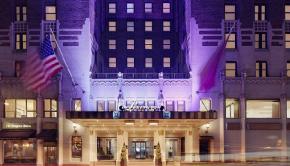