LAWRENCE, MA-JPI purchases British Colonial Apartments and Beacon Terrace Apartments for $17 million from a private investor. The deals mark the first purchase of existing property in the Greater Boston area for the Dallas-based real estate developer.

LAWRENCE, MA-JPI is purchasing British Colonial Apartments and Beacon Terrace Apartments for $17 million. The deals mark the first purchase of existing property in the Greater Boston area for the Dallas-based real estate developer.

The properties were sold by a locally based private investor, KG Associates, which developed them in the 1970s. The 210-unit British Colonial Apartments sold for $15.8 million, while the 12-unit Beacon Terrace Apartments sold for $1.3 million. Apartment Realty Advisors, a national multifamily brokerage and investment advisory company, represented the seller in the deal and procured JPI.

“JPI is aggressively pursuing value added opportunities in the greater Boston area and our company plan is to target $100 million of new acquisitions annually,” says JPI acquisitions partner Pat Gniadek. JPI plans to re-position and market the Lawrence property as Hampton at Beacon.

The property consists of seven buildings, each with 30 units. It is located near Routes 495 and 93 on the Andover/Lawrence line. The units have wall-to-wall carpeting in the living areas, A/C wall units, and wood balconies with wrought-iron rails.

Industry veteran, Travis McCready has been appointed as executive director and national practice leader of the firm’s life sciences practice.

The two units blend the look of large sculptural flowers while providing for the creation and storage of about 4,000-to-6,200 kilowatt-hours per year of solar energy. 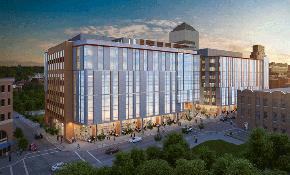 Durham Innovation District’s first phase development sold as the Southeast’s largest office sale transaction since the beginning of the pandemic.