WASHINGTON, DC-Big money changes hands as a partnership involving Shorenstein Co. and real estate investor David Warner takes over ownership of the 330,000-sf trophy office building at 1111 Pennsylvania. It is rumored that the transaction is valued at approximately $156 million.

The 14-story tower features ground-level retail space and is almost entirely occupied by law firm Morgan Lewis & Bockius LLP, which relocated from offices at 18th and M streets to its 305,000-sf digs at 1111 Pennsylvania in 2002. Eastdil Realty was the sole broker on the deal. As per District records, the property is assessed at a proposed FY 2005 value of just over $126 million.

Located halfway between the Washington Monument and the MCI Center, 1111 Pennsylvania carries the distinction of being one of only a handful of privately owned office properties on the well-traveled stretch of Pennsylvania Avenue between the US Capitol and 14th Street. It is considered one of the premier buildings Downtown, having undergone a $40-million renovation spearheaded by Studios Architecture two years ago.

The gargantuan undertaking paved the way for Morgan Lewis’s move in; the firm had preleased the space in the late 1990s. Morgan Lewis occupies the space under a below market-rate lease–reportedly locked in at about $29 per sf–that is not scheduled to expire until the end of 2017.

Competition was steep among investors who had hoped to own the award-winning building, which is characterized by a 135-foot private terrace, two-story conference center and a prism that funnels natural light down the 14 stories. Ownership of the building last changed hands in 1999 in a $29.2-million transaction. Neither Eastdil nor the Tauber estate could be reached for comment. 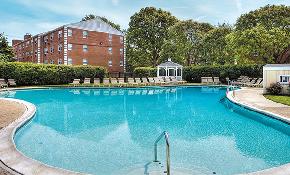