WHITE PLAINS-As part of an effort to sell more than $500 million of assets by the middle of next year, Starwood Hotels & Resorts Worldwide sells the Four Points by Sheraton Rancho Bernardo in San Diego and the Sheraton Russell in Manhattan for a combined $58 million.

WHITE PLAINS-Starwood Hotels & Resorts Worldwide Inc. sold two Sheraton properties in San Diego and New York City for a combined $58 million. The hotelier has sold the 146-room Sheraton Russell Hotel in Manhattan to an entity of SJP Residential Properties of Parsippany, NJ for more than $40 million. In addition, Starwood sold its 206-room Four Points by Sheraton Rancho Bernardo in San Diego to Dimension Development Co. Inc. of Natchitoches, LA for more than $18 million.

Starwood, which has sold more than $1.1 billion in hotel assets since 2003, plans to use the proceeds of the two hotel sales for share repurchase and general corporate purposes. The sales are part of a plan to part with $500 million of assets by the middle of 2005, company officials say.

“We see it as a great market that has growth potential and should provide great opportunities for our hotel,” says Ken Thompson, senior vice president of operations for Dimension Development. The company, which has a portfolio of 35 hotels nationwide, also used the purchase to expand its presence in the San Diego marketplace. The company already owns one Hampton Inn and two Residence Inn by Marriott hotels in San Diego.

Thompson says Dimension plans to reflag the Fort Points by Sheraton Rancho Bernardo to a Courtyard by Marriott by the third quarter of 2005 and plans to undertake a renovation program at the facility that he estimated would cost several million dollars to complete.

The firm has already taken over management of the facility. Sheraton has retained management responsibilities at the Sheraton Russell, located at 45 Park Ave. at 37th Street in the Murray Hill section of Manhattan. 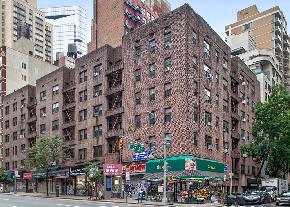 A joint proposal aims to strengthen and modernize the process to meet the needs of local communities.