JACKSONVILLE, FL-The grocer is exiting the Carolinas, Tennessee and Virginia and will be left with 587 stores.

JACKSONVILLE, FL-Bankrupt grocer Winn-Dixie is closing 326 units in the US and Bahamas, leaving it with 587 stores. The retailer, hurt by competition from Wal-Mart and other grocery chains, filed for bankruptcy protection in February.

“Creating a smaller, but more profitable store base will best position Winn-Dixie for long-term financial health and a successful future,” says Peter Lynch, the company’s president and CEO, in a statement. “We will be focusing our resources on markets where Winn-Dixie has a strong presence and there are compelling opportunities.”

Winn-Dixie is keeping its presence in some areas of Alabama, Florida, Georgia, Louisiana, Mississippi and the Bahamas. The company is altogether exiting both Carolinas, Tennessee and Virginia, as well as northern parts of Alabama, Georgia and Mississippi. The retailer will also close some stores in Louisiana.

The company is also shutting three of its 10 distribution centers and will market its manufacturing plants. After the closures, company executives expect annual revenues to drop from their current $10 billion to $7.5 billion.

As a result of this restructuring, Winn-Dixie will reduce its workforce by 28%, or 22,000 employees. During its Q2, the latest quarterly financial period the company has reported, in February, the grocer posted a net loss of $399.7 million compared to $79.5 million for the same period in fiscal 2004. Same-store sales during the quarter dropped 4.9% from the same year-ago period. 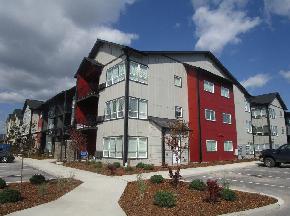 The firm has secured $42.7 million in new agency financing for communities in Washington and Montana, on behalf of two private investment entities.