SOFIA, BULGARIA-Los Angeles-based Tishman International Cos. is developing a corporate office and logistics park here over the next two years in partnership with the Germany-based contractor Lindner AG. Earlier this month, a consortium led by GE Commercial Finance Real Estate bought into a major mixed-use development here.

SOFIA, BULGARIA-Los Angeles-based Tishman International Cos. is developing a 1.1 million-sf business center adjacent the new airport here in a joint venture with contractor Lindner AG of Arnstorf, Germany. To be built out over the next two years, the project includes corporate offices, a logistics center and other business facilities.

The new airport is expected to accommodate up to 2.6 million passengers per year eventually and 1.9 milion initially. In addition, Tishman officials say they chose the project because of its fast-growing economy and forthcoming EU membership, which is expected in 2007. The old airport buildings are expected to be used for charter flights from Europe. The project has been fully supported by the local authority and the municipality, according to Tishman officials.

This is the second US investment in the state capital making headlines in recent weeks. Earlier this month, a consortium led by GE Commercial Finance Real Estate said it bought a 50% stake in an Israeli joint venture developing the Mall of Sofia, a 360,000-sf mixed-use project. The GE consortium includes Golub & Co., GE’s long-time partner in Central Europe.

The project, which is under construction, will include a two-level shopping center, a 12-screen cinema, a supermarket and a five-story office building. Construction on the retail element began in July 2004, with completion scheduled for March 2006. The project is 78% preleased. Completion of the office component is scheduled for May 2006. No preleasing has been announced.

How Did Germany, Japan, and South Korea Escape the Global CRE Fall?

These countries were able to make the most of real estate transparency, government stimulus, and domestic capital. 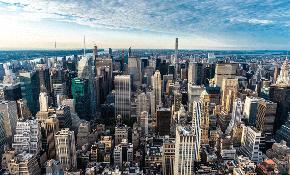 The global insurance company will additionally consolidate its remaining footprint within the area by occupying two new office spaces.

Houston to Benefit From China Plus One Supply Chain Restructuring

US supply chains will shift away from an over-reliance on China to include more expanding Asian and European markets, which will establish new national distribution models that will particularly benefit regions such as Houston.