NEWARK-They are concerned about lagging job growth and how, in that light, the Garden State's office market will see its vacancies go away, economists tell regional business leaders.

NEWARK-The New Jersey economy “is rolling along at a nice pace and should be in good shape over the next 12 months, barring the unforeseen,” Rae D. Rosen, senior economist and assistant VP for the Federal Reserve Bank of New York, told business leaders at a forecast event sponsored by the Regional Business Partnership here yesterday. “But employment is stagnating. We would like to see better signs,” she admitted.

The problem, Rosen explained, is that the jobs being created are relatively low-end, while jobs continue to be lost in information and other high-paying sectors, and that scenario has a direct impact on this market’s ability to fill its vacant office space. “It is something that should concern you,” she said.

While asserting that “New Jersey has done better than the rest of the country, this is the poorest recovery from a recession on record,” she continued. And while the unemployment rate ticked up to 4.2% in August, a .1% rise, she attributed that to in-migration of people looking for jobs, rather than a loss of jobs.

James W. Hughes, dean of the Bloustein School of Planning and Public Policy at Rutgers University, meanwhile, asserted that “we have been maintaining our status by living off of our core assets.” Relating that the growth of high-paying jobs in the ’90s fueled the growth of the office market, he said “the economic reality of the past five years is that job growth has resumed, but slowly. Corporate America is expanding briskly, but largely outside New Jersey.”

Concurring with Rosen that most of the current job growth has been in sectors that pay below-average wages, namely education, health services and leisure and hospitality, he said that jobs in the high-paying financial, professional services and information sectors “continue to erode,” and those are the sectors that fill office space. Beyond that, the trend is causing “income erosion to take place.”

Relating to oil prices and the recent natural disasters, “the US economy is showing resilience,” said Richard F. Moody, senior economist for PNC Bank. “The economy, nationally, had a lot of momentum, and while the physical damage in the Gulf caused concern, and energy prices spiked, the momentum has kept things going.

“We don’t think the economy will tumble into recession,” Moody said, although he conceded that “it might slow down. “We had already been coping with higher energy prices since early this year. The economy will continue to grow, but at a slower rate.” 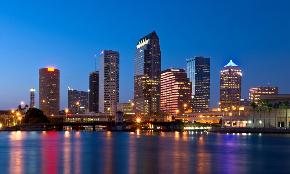