PEORIA, AZ-Two apartment complexes now under construction will add more than 400 apartments to a quarter-mile section near Arrowhead Mall and Peoria Sports Complex. The multimillion-dollar complexes will deliver in October 2006.

Jeff Roberts, vice president of real estate development for Phoenix-based Opus West Corp., which is building the upscale units in a joint venture with Atlanta’s Trammell Crow Residential, tells GlobeSt.com that both developments should lease up quickly at rents ranging from $800 to $1,500 per month. “We were very interested in the location primarily because it’s right behind a regional mall and across the street from the spring training facilities,” says Roberts, noting both sites are located in the hub of retail, employment and recreational activities.

The 240-unit Alexan at Paradise Lane, the larger of the two ventures, will put one-, two- and three-bedroom townhouses and single-floor apartments on the market at 83rd Avenue near Bell Road and Loop 101. The $23-million project will feature a host of amenities, with rents ranging from $800 to $1,400 per month. The complex is located directly across the street from the Peoria Sports Complex, the spring training facility for the Seattle Mariners and San Diego Padres.

The $17-million Alexan Bella Vista, rising at 77th Avenue and Paradise Lane, will have 163 townhouses in one-, two- and three-bedroom floor plans. It will be the first all-townhouse development in the Peoria area. It also will feature upscale amenities, including garages. Rents will run from, $900 to $1,500 per month.

The Alexan developments were designed by the architectural firm of Todd and Associates Inc. and are being built by TCR Southwest Construction Ltd, both from, Phoenix. Marketing will begin in April 2006, with delivery coming six months later. 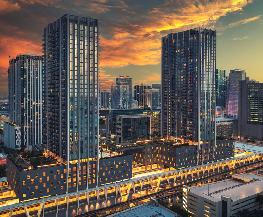