PHILADELPHIA-Federated dashes hopes that Center City would retain both of the department stores it acquired here. Macy's will replace Lord & Taylor in the Wanamaker Building and the 621,000-sf Strawbridge's will close in June.

PHILADELPHIA-Federated Department Stores Inc. will convert the 354,000-sf Lord & Taylor in the Wanamaker Building to Macy’s and close the 621,000-sf Strawbridge’s, dashing hopes that Center City would retail both of the department stores. Clearance sales will begin at both locations on April 2.

Conversion of Lord & Taylor, which is located across from City Hall, will begin this June, and, following “some minor remodeling,” a Federated spokesman says, will re-open as Macy’s in August. Strawbridge’s, at Eighth and Market streets, is scheduled to close in June. The spokesman says the company “will seek buyers or replacement tenants for space currently occupied by Strawbridge’s.”

GlobeSt.com has learned that the city’s department of commerce led efforts to get the Cincinnati-based owner to replace Lord & Taylor with Bloomingdale’s and convert Strawbridge’s into a Macy’s. During an ICSC program here less than a week ago, Paul Levy, president and CEO of Center City District, revealed preliminary plans to revitalize Market East, where Strawbridge’s opened in 1868. During a March 3 conference call, Ronald Rubin, chairman and CEO of Pennsylvania Real Estate Investment Trust, which owns the adjacent Gallery at Market East, said conversion of Strawbridge’s to Macy’s was “a possibility.”

Lord & Taylor opened in the Wanamaker Building in 1997, following the 1995 closing of the one-time Wanamaker shopping mecca. The Federated spokesman says Macy’s will retain the world’s largest pipe organ and large bronze eagle statue that have been in the store since its founding by John Wanamaker in 1875 and continue the store’s Christmas light show.

Federated acquired Lord & Taylor and Strawbridge’s in August 2005 as part of its merger with the May Departments Stores Co. and plans two national brands: Macy’s and Bloomingdale’s. This summer it will close five Lord & Taylor units in Missouri, Delaware, Michigan and Massachusetts. The remaining 49 units in 10 states and Washington, DC will remain open and operating while Federated pursues divestiture of the Lord & Taylor division in a transaction the spokesman said is expected to close by the end of this year. By next month it will sell or close all Strawbridge’s anchor stores in malls that also contain a Macy’s.

32 million Americans are currently receiving unemployment benefits, without which many will be in a difficult position come the first of the month.

While a number of developments have stalled, and some have been canceled, many not-yet-completed real estate construction projects will still go forward, although likely at a slower pace, according to Moody's Analytics. 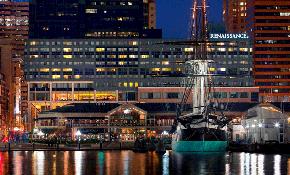 The Buccini/Pollin Group has acquired the 622-room hotel from Sunstone Hotel Investors; further expanding its lifestyle portfolio of Marriott-affiliated assets.