WASHINGTON, DC-The 100 basis point drop in rates will have more of a psychological effect than material impact on the DC market.

WASHINGTON, DC-The US General Services Administration’s Public Buildings Service (PBS) will reduce the leasing fees it charges to federal customer agencies housed in GSA-managed leased facilities, a universe that encompasses more than 166 million rentable sf of space in 7,300 buildings in 2,100 US cities and towns.

Starting in FY 2008, PBS will reduce its fee from 8% to 7% for the majority of leased space in which agencies are housed. The fee for unique space will be reduced from 6% to 5%. Although the drop in fees is 100 basis points, a lot of money in the aggregate, Herman Bulls, a member of Jones Lang LaSalle’s Public Institutions Group here acknowledges, the decision by GSA will provide more of a psychological boost to the markets than any material benefit.

“Government agencies have voiced concern over the fees that they pay GSA,” he tells GlobeSt.com. “This is one of the measures GSA is taking to reduce its costs.” It is also a response by the agency to market pressures, he adds, which in general have been driving down the leasing operation costs.

“We don’t think this change will have any impact on the Greater Washington metropolitan region except that we will have happier customers,” a spokesperson for GSA tells GlobeSt.com “It’s about being able to provide our customer agencies savings which translates to savings for the taxpayer.”

The activity comes amidst conflicting data on how many people are actually returning to offices across Manhattan. 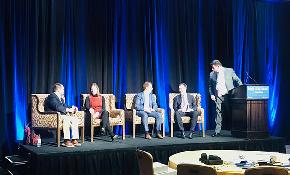 The Perfect Healthcare Portfolio in a Post Pandemic Future

Panelists at the recent GlobeSt. Healthcare Real Estate national conference expand their horizon and look at the hospital space as well as behavioral healthcare space for yield.