CHEVY CHASE, MD-Mills Corp. has completed the sale of its interests in its three foreign assets–Vaughan Mills in Ontario, Canada, St. Enoch Centre in Glasgow, Scotland and Madrid Xanadu in Spain–to Ivanhoe Cambridge Inc. for about $988 million.

Mills generated proceeds of about $500 million before transaction costs, the company says in a statement, using about $400 million to pay down part of a senior term loan with Goldman Sachs Mortgage Co. It is also holding a “significant portion” of the remaining proceeds in escrow for foreign taxes over what is expected to be due. Additional proceeds are being held in connection with previously disclosed litigation with Parcelatoria de Gonzalo Chacon.

“The acquisition of the Mills’ interest in Vaughan Mills, St. Enoch Centre and Madrid Xanadu is in line with Ivanhoe Cambridge’s strategy to further enhance the quality of ourportfolio of properties under management, and diversify geographically by expanding ourinternational activities, investments and networks,” René Tremblay, president and CEO of Ivanhoe Cambridge, says in a statement.

These properties are not entirely new to Ivanhoe Cambridge. The Montreal-headquartered company previously jointly owned Vaughan Mills and St. Enoch Centre with Mills. It also has a strong knowledge of the Spanish market, where it is currently co-developing Islazul Centro Comercial, a 900,000-sf regional shopping center. The company adds it remains committed to the previously announced redevelopment of St. Enoch Centre.

Vaughan Mills is a 1.2-million-sf retail and entertainment property. It opened its doors in November 2004 and was the first enclosed shopping center built in Canada in more than 14 years. St. Enoch Centre is a 715,000-sf retail property in Glasgow’s city center shopping district. Ivanhoe’s redevelopment plans include a 250,000-sf addition of retail and leisure space and a mall refurbishment. Madrid Xanadu opened in 2003 and features 1.4 million sf of retail, services, leisure and dining. It also boasts the only indoor snow facility in Spain.

The completion of this deal was a crucial step for the beleaguered Mills as it works to resolve its financial issues. “This transaction demonstrates that we are moving forward with our efforts to sell all or part of the company,” new CEO and president Mark Ordan says in a statement. Earlier this week the company announced Laurence Siegel was retiring as CEO of the company and was replaced by Ordan, who had been the COO since March.

Still pending is another crucial transaction for Mills: the construction financing of the REIT’s East Rutherford, NJ-based Meadowlands Xanadu project. The closing date of this deal–in which Los Angeles-based Colony Capital Acquisitions will provide $500 million in equity capital and arrange construction financing with Mills financial JV partner, Germany’s Kan Am USA Management, for the rest of the projected $2-billion cost–has been delayed by more than a week now. A spokesperson for Mills declined to comment on the progress of this transaction when reached this morning for comment about the Ivanhoe Cambridge trade. “We haven’t announced anything yet,” he tells GlobeSt.com.

The delay is worrisome, says a research note written by Banc of America Securities analyst Ross Nussbaum in New York, which was published when Siegel said he was retiring. If the Meadowlands Xanadu deal falls apart, he said in the note, “Mills’ shares are likely to come under pressure, as the company would once again be burdened by the funding needs of this ill-fortuned project.” 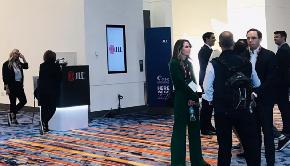