Buyer in Hand for University Property

PORTLAND, OR-The 40-acre property in Hillsboro is home to 15 buildings totaling 270,000 sf. The sale price is said to be close to the $44-million asking price.

PORTLAND, OR-Oregon Health & Science University has agreed to sell the Oregon Graduate Institute campus in Hillsboro to an undisclosed buyer for close to the $44-million asking price. The 40-acre property is home to 15 buildings totaling 270,000 sf, the largest of which is the 85,000-sf Bronson Creek office building.

The sale agreement was discussed at a public meeting of the University’s board of directors this week, an OHSU spokesperson confirmed. The sale is slated to close before the end of the year. The name of the seller was not disclosed due to a confidentiality agreement, according to the spokesperson.

To allow time for the new campus to be developed, OHSU would lease back a portion of the OGI campus for seven years. That portion would reportedly not include the Bronson Creek office building.

OHSU will continue to own another 100 acres in Hillsboro that are home to its primate center, Neurological Sciences Institute and Vaccine and Gene Therapy Institute. Those uses will remain in Hillsboro for the long term, according to the spokesperson.

The Case for EV Charging At Shopping Centers

GlobeSt.com caught up with Blink Charging’s Mike Battaglia at ICSC’s national conference here in Las Vegas, where he reviewed steps shopping owners can take to stay ahead of the curve and increase traffic and store profitability. 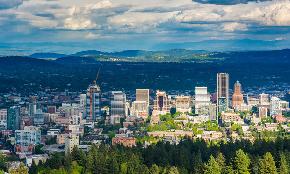 Portland’s Population Grew By 30,000 Residents During the Pandemic

The population growth has carried into 2021, and it is fueling multifamily investment in the city.