CHICAGO-A venture of Hines Interests and Levy Investment Group have signed the deal to sell One South Dearborn, the 40-story office building for more than $420 per sf, or about $350 million to Newport Beach, CA-based Olen Properties Corp. The 830,000-sf building opened in October 2005, and is anchored by the law firm Sidley Austin LLP. The property is home to the US headquarters for Barton Brands and Mittal Steel, as well as Hines’ Midwest Regional Office.

A Hines spokeswoman said the company will still manage and lease the building. Olen officials did not return calls for comment. The building is 92% leased, about 2% more occupied than when it was put on the sales block in December, the spokeswoman told GlobeSt.com.

One South was also recently honored with the Downtown Office Development of the Year award by the Chicago branch of NAIOP. The building was one of four office projects completed in 2005, and was seen during construction as one of the super class A developments that would create large office vacancy in a then-fragile market. However, a recent report by Transwestern shows more than 35,000 new office jobs were added this year, boosting office occupancy more than expected in Chicago, and keeping vacancy rates at about 13.8%.

Los Angeles has double the tech jobs as Orange County and climbed five spots this year on a ranking of the top tech markets in the country. 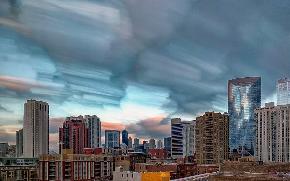 52 projects totaling 27.2 million square feet are under construction, setting a new record for the most space being developed at one time