ALLENTOWN, PA-As expected, Liberty Property Trust’s sale of the Plaza at PPL Center hit a new benchmark for Pennsylvania office property sales outside of Philadelphia. Although the exact price is undisclosed, Mark DeRiemer, managing director in the New York office of Jones Lang LaSalle, tells GlobeSt.com it was “more than $325 per sf and less than $350 per sf,” or “comfortably over $82 million.”

Malvern-based Liberty charged DeRiemer with marketing the eight-story 252,193-sf building this March after energy supplier PPL Corp. declined to exercise its first right of refusal to buy the property. Liberty developed it as PPL’s headquarters at a cost of approximately $60 million and delivered it in July 2003. It was designed by New York-based Robert A.M. Stern Architects and received a LEEDs gold rating from the US Green Building Council.

When the property went to market unpriced, DeRiemer told GlobeSt.com, “it will clearly break a record” for sales in the Lehigh Valley. He speculated that there would be interest from overseas buyers but the most likely prospect would be a domestic buyer. As it turns out, it sold to a combination of both, “a syndicate from different overseas locations with some domestic participants, who want to remain anonymous,” he says.

PPL occupies approximately 80% of the space under a lease that extends for another 10 years. Other tenants include Nazareth National Bank, Amazon Café and Johnny Manana’s. It is 85% leased, “providing upside potential,” DeRiemer says, at a rent rate in the high $20s per sf.

The sale also includes a 1,109-space parking garage. The building is located at 835 W. Hamilton St., the site if the former Hess Brothers Department Store. Its construction was the first new office development downtown in 25 years and became the cornerstone of revitalization of the central business district.

There is a Lot of Dry Powder Seeking Net Lease Deals

With 1031 exchanges may back off, one observer says institutions are ready to spend.

CRE Is Starting to Solve Its Diversity Problem

The most recent conversation around racial equality has helped wake the CRE industry up to the issue and solve it. 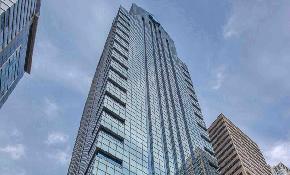