SEOUL, SOUTH KOREA-John B. Hynes III probably has no set ranking of the visits made here since Gale International embraced its $25-billion master-planned city project on 1,500 acres of reclaimed Incheon waterfront. But in concluding the 59th sojourn from his native Boston since 2001, Hynes tells GlobeSt.com the latest trek to New Songdo City was worth the jet lag.

“We made some really good progress this time,” says the veteran developer. Gale and minority partner Posco E&C (70/30) unveiled commitments with Korean Air Lines and United Technologies Corp. to advance the building sustainability movement, and announced a series of projects that will see 5.5 million sf of commercial construction under way by the end of 2008. The events are linked, Hynes explains, allowing Songdo to live up to a bold environmental mantra that has already earned the 100-million-sf mixed-use concept a berth as a pilot project of the USGBC. Memorandums of understanding were signed setting LEED Silver as a baseline standard on buildings going forward.

“That’s never been done before anywhere,” Hynes says. “It’s our contribution to 21st century design and development.” The results could be far reaching, he suggests, given New Songdo’s claim as the largest private real estate venture in the world. A Korean Air and Inha University partnership is joining UTC and Gale/Posco to build a research facility for studying and promoting “green” ideas, products and technologies. A part of the Songdo International Business District–the city’s commercial core–the Sustainable International Business Center will host an annual conference aimed at further positioning Songdo IBD as “the center of environmental initiatives in Northeast Asia.”

Besides Stanley Gale, chairman of the New York City-based real estate investment and development firm, the signing ceremony was attended by current US Korean Ambassador Alexander Vershbow and former Ambassador Thomas Hubbard, chairman of the Gale International Advisory Board. Korean Air affiliate Hanjin Group was represented by Chairman Yang-Ho Cho. Hartford-based UTC showed its commitment by dispatching CEO George David. “The SIBC is an extraordinary opportunity to demonstrate on an urban scale what can be accomplished,” David said in his remarks.

UTC and Hanjin are valuable allies, says Hynes, praising both for being on the sustainability front lines. Through subsidiaries such as Carrier, Hamilton Sundstrand, Otis Elevators and Sikorsky, UTC has pioneered energy saving products and systems ranging from elevators that regenerate electric power to zero-emission buses using fuel cells. For the third year in a row, UTC was named among the 100 most sustainable corporations at the 2008 World Economic Forum in Davos, Switzerland. “Wasted energy is a big concern to them,” Hynes says of his new partners.

Hartford-based UTC is already entrenched in Korea, employing 3,400 people in 17 cities, and the pedigree of the $50-billion conglomerate helps validate Songdo, adds Hynes. “To get a Fortune 100 company to step up like they did is big news,” he says. “It proves that we have been able to take the project to a new level of credibility and shows that it is really going to get done.” A centerpiece is UTC’s backing of the U-Life Northeast Asia Headquarters, which will be the first LEED Platinum-rated building in Korea. A joint venture of Gale, Posco E&C and tech firm LG CNS, U-Life NAH will serve as the computer nerve center of Songdo IBD. The headquarters will feature public exhibit areas showcasing sustainable and high-tech innovations in the new city.

With the sustainability goals now in place, Songdo can ramp up production of new office space and other elements, part of a need to convince skeptical prospects that the utopian urban vision is happening, with a grand opening slated for late 2009 and final completion by 2014. “We’ve had a number companies who are extremely interested, but they have held back to see whether we can perform,” Hynes relays. In that respect, it seems tenants are no different in Korea than Boston, he says, with commitments for commercial space often hard to come by in both markets until construction commences. For that reason, Gale has been proactive in Hynes’ hometown as well as it proved in building a 36-story office tower with more than a million sf now fully leased to State Street Bank Corp. Gale is now pursuing two other major Boston projects, including another blank-slate master-planned complex on the city’s waterfront.

In addition to UTC and Hanjin’s financial heft, Songdo’s popular residential element should generate up to $300 million in income that the developers will use to leverage $1 billion in new construction, of which three million to four million will break ground next year. A total of seven million sf of fresh commercial construction is included in the latest round announced by the new partnership, including one property being fashioned after Rockefeller Center. Presently, about three million sf of office space is under way in the Songdo IBD. That space is partly leased, including one building housing Posco’s operations.

Blackstone Raises $7B For Asian CRE 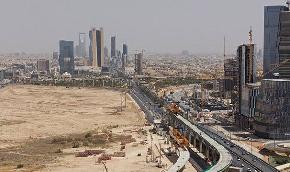 Dense, amenity-rich communities are becoming the norm in the US, but Saudi Arabia they are unknown.