PERRIS, CA-Whirlpool Corp. has signed a long-term lease for the entire 1.7 million sf of a new distribution facility developed on spec in this Inland Empire city by Los Angeles-based IDS Real Estate Group. The project, named Perris Distribution Center, is believed to be the nation’s largest single spec industrial building under one roof.

Financial terms of the lease were undisclosed. Industry sources, however, indicate that the total consideration is north of $80 million.

IDS developed the project on an 80-acre parcel that the company bought in 2005 at the northeast corner of Perris Boulevard and Morgan Street along the strategic Interstate 215. Whirlpool is relocating from three smaller facilities throughout the Inland Empire and moving into an equivalent amount of space at the new facility for its Southwest Regional Distribution Center.

Murad Siam, CEO of IDS, points out that the company drew upon all of its core competencies during the three-year development of the Perris Distribution Center: corporate services, real estate management, development management and advisory services. Dan Sibson, senior vice president of IDS, notes that the L.A.-based development firm also benefited from its experience with the 1.5-million-sf Haven Gateway Center in Ontario.

According to IDS senior vice president Rob Fuelling, the need for a 1.7-million-sf building was validated by what the company saw elsewhere in the market. “We saw buildings of 1.2-million-sf in the market and 400,000-sf buildings down the street with the same user’s name on them. It was clear to us that there was a need for even larger buildings to accommodate major retailers under one roof.”

“In spite of the fact that the Inland Empire is by far the largest industrial market in the US, there are still very limited options in land and buildings over 1.5-million-sf,” Wendel says. Foster explains that Whirlpool was originally looking for land to build its own facility to distribute products throughout the Southwest.

“After extensive searching both in the basin and outside the mountain passes, we simply could not find a shovel-ready, adequate-sized parcel of land,” Foster says. He says that the Perris Distribution Center was not only the right fit in terms of size and functionality, but its location within the Los Angeles Basin proved logistically ideal, allowing for intermodal transport to provide better service to Whirlpool’s diverse clientele.

Jones Lang LaSalle’s Project and Development Services Group, spearheaded by Judy Caruthers and Jon Holzer, has been retained to monitor the delivery and completion of all on-site and off-site improvements associated with the project.

According to Belden, projects like the Perris Distribution Center have become feasible in the Inland Empire because of the lack of available land for such large facilities within the traditional boundaries of the Southern California Basin. Designed by Hill Pinckert Architects of Irvine, Perris Distribution Center features enough space under one roof to fit 31 football fields. 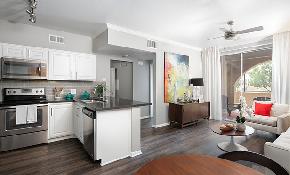