ETNA TOWNSHIP, OH-The companies have expanded in the 1.6-million-sf Park 70 here, where ProLogis hopes to have 3.4 million sf at full build-out.

ETNA TOWNSHIP, OH-Two companies recently leased more than 300,000 sf at a building in ProLogis’ Park 70-Etna, a 220-acre industrial park now under development in this Columbus submarket. SpeedFC and Menlo Worldwide Logistics both have expanded space they currently use in the warehouse and distribution park, leasing space in the 524,180-sf 107 Heritage Dr. building.

Garland, TX- based SpeedFC, a fulfillment company, is taking 158,000 sf. The company already leases 160,000 sf in the park. San Mateo, CA-based Menlo, a freight and logistics firm, has added 150,000 sf, bringing its total to 461,000 sf at the park. Both companies expanded into the 107 Heritage building, which is now 90% occupied, says ProLogis SVP Brian Marsh. “We’ve got about 55,667 sf still available in the building, which we finished about six months ago,” he says. Lease rates average about $3 to $3.25 in the park, Marsh says. He wouldn’t divulge how long the leases are for, but says they are long-term.

ProLogis is also seeking tenants for its third building, at 127 Heritage, that it recently finished. There is interest in the 524,000-sf spec building, Marsh says, but no leases yet. “We’re very encouraged. We had two customers expand here. We’re optimistic on the market, central Ohio continues to be a very effective place for distribution, it’s a one-day truck trip to many of the large North American markets. Our park has great access on I-70, and a good labor pool in the area.” ProLogis is seeking silver LEED certification for the 127 Heritage facility, with the use of recycled and locally sourced building materials, skylights and low-maintenance landscaping to minimize water consumption and waste, among other green initiatives.

The company plans on adding two more large buildings to the 1.6-million-sf park, ending up with 3.4 million sf. It’s costing ProLogis about $23 to $27 per sf to put up the buildings, a company spokeswoman tells GlobeSt.com.

Spurred On By the Pandemic, Companies Seek to Leave High-Cost States

One observer thinks the pandemic will be an accelerator of these relocations. 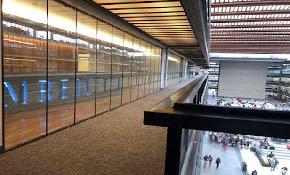 The property at 747 Mill Park Drive is net-leased for 10 years to Magna Seating of America, Inc., a division of Magna International.