ANDERSON, IN-The city is looking to unload about 274 acres of properties that the automaker has abandoned here. The first sale has closed on a 20-acre office site.

ANDERSON, IN-On the slow road to recovery, the city has sold one of its eight vacant General Motors plant facilities to a company, though for a lower price than expected. The city, which lost 30,000 jobs when the automaker vacated its hub a few years ago, has been trying to unload about 274 acres that have about 734,000 square feet of industrial and office facilities, some polluted.

Hy Tech Machining purchased the Plant 18 property, about 20 acres that includes a 91,000-square-foot office building and another 150,000 square feet of industrial, for almost $500,000. The site had appraised at $705,000, said Linda Dawson, director of economic development for the city, but that “considerable damage had occurred to portions of the building since that appraisal.”

Teresa Lay, co-owner of Hy Tech, says the company hopes to add almost 100 employees in the next five years after the move to the new facility. She says she’s not sure if the company, which repairs and maintains industrial machines and tools, will demolish the buildings on the site or not. “We’re in the due process period, a lot of things can change. We may salvage some of the buildings,” he tells GlobeSt.com. Her firm had purchased 17 acres near its current location for a 100,000-square-foot new building, but the development didn’t pan out.

She says her company is more fortunate than those that had supplied GM in the city. “The economy has had an effect on a lot of companies, but we’ve stayed busy. Our auto industry work is nearly non-existent, we do work for industries such as medical and aerospace,” Lay says.

In September, the city hired Coldwell Banker Real Estate to market the former GM facilities. These properties include Plant 20, with 345,000 square feet on 70 acres, and Plant 16, with 168,286 square feet on 24 acres. Most of the properties are along Scatterfield Road, just two miles north of Interstate 69. The city is offering New Market Tax Credit incentives for the sales.

Silicon Valley Continues to Adapt to a Post-COVID Economy

At a sale price of $275 million, Cupertino-based developer Hunter Properties recently disposed of Phase I of Coleman Highline, a 1.75 million-square-foot mixed-use campus. 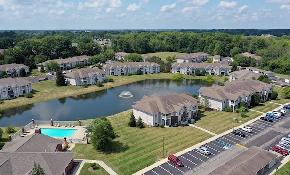 Spruce Capital secured $102 million in Fannie Mae financing that was arranged by Newmark Knight Frank in connection with the purchase.