SAN ANTONIO, TX-Marshall V. Davidson Jr. has joined Christopher Gill Cos. as president. In that role, Davidson will be handling day-to-day operations, as well as working with lenders and other institutions that have troubled assets on their books.

Davidson, who was born and raised in San Antonio, steps into the company’s leadership role while Christopher Gill, the former president, will retain his title as chairman of the family-owned and operated company, which deals with real estate management, developments and brokerage. “Marshall’s going to run the business, that’s his baby now,” Gill tells GlobeSt.com. “What I bring to this is an insight how to constructively resolve problems.”

The problems these days focus on institutions with assets they neither want nor desire, but were forced to take due to foreclosure or receivership. Gill remarks, and Davidson agrees, that Christopher Gill Cos.’ structure is flexible enough to take on this particular market, and hopefully add some value to the assets.

“This will be the primary focus of ours right now, trying to help lenders with properties that come back to them for no other reason than the developer can’t service the debt,” Davidson tells GlobeSt.com. “Once we can get an acknowledgement of the new pricing, and get those assets turned around, we can improve the value. There’s nothing intrinsically wrong with those assets.”

Davidson points out he’s using a model that worked well for former employer Cushman & Wakefield of Texas Inc., were he was director. That model, he comments, involves teams of specialists who deal with specific assignments and products that are complementary to their skill sets. “There are a heck of a lot of people at Cushman & Wakefield who are great specialists,” he comments. “You’re a lot stronger when you can bring in people who know their product. All of that wasn’t lost on me.”

However, according an early April 2009 lawsuit filed by Davidson against Cross & Co. for fraud inducement, Davidson was allegedly told he was being removed from his job as president, and stripped of his salary and partnership interest for no apparent reason. The suit also alleges that Davidson’s “duties and compensation” would be those of a “regular broker” rather than an executive. Davidson ultimately left the company. Calls and e-mails to Cross & Co. were not returned by deadline and Davidson didn’t wish to elaborate further about the lawsuit or his brief experience with Cross.

Davidson did say he’s looking forward to using skills obtained through years of working with C&W to help Christopher Gill Cos.’ growth. He says the terrific thing about the C&W model in which he had operated for close to a decade works in both boom and bust cycles.

“The goal here is to focus on primarily what we know and where we are,” he remarks. “Since we’re in central Texas, that’s a good place to start; working with companies in central Texas.” Furthermore, he continues, his familiarity is with industrial and office product, and he’s not planning to deviate from that course.

“We actually want to know the product we’re trying to manage and/or purchase,” Davidson comments. “I think when you’re so divorced from the product and actually don’t know the real estate you’re working with, you’re in trouble.”

How Hotels are Faring in Transformative Times

Despite the plethora of bad news there are also several reasons for optimism. 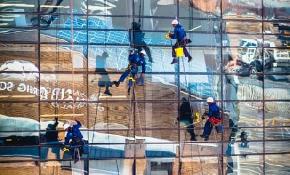 As more people face sudden unemployment during the slowdown, the Opportunity Zones initiative and if utilized, the EB-5 investor program will continue to provide jobs to distressed communities across the country.