PHILADELPHIA- Griffin Land & Nurseries has agreed to acquire a leased industrial building and 51 acres of undeveloped land north of the central city, according to an SEC filing. The properties were auctioned separately by the trustee of the bankruptcy estate of the sole owner of the properties. Griffin, a publicly traded company based in New York City did not identify the seller and did say what its ultimate plans are for the properties in Wednesday’s SEC filing and CFO Anthony Galici was not immediately available for comment.

Located in the major industrial areas of the Lehigh Valley, the two properties would be Griffin’s first investment outside of Hartford. The industrial building, located in Breinigsville, totals 120,000 square feet, was built in 2007 and is fully leased for the next six and one-half years, according to Griffin. The undeveloped land, located in Lower Nazareth, is slated for two industrial buildings totaling approximately 530,000 square feet. The combined auction price was $8.2 million.

The acquisitions are subject to several conditions, including the completion of due diligence. If no deal killers turn up, the sales are expected to close in late December or early January.

Griffin operates Griffin Land, a real estate business, and Imperial Nurseries Inc., a landscape nursery business. Griffin also has investments in Centaur Media plc, a public company based in the United Kingdom that is listed on the London Stock Exchange, and Shemin Nurseries Holding Corp., a private company that operates a landscape nursery distribution business. 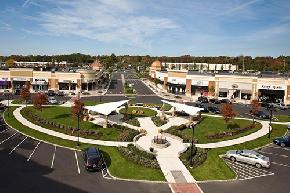 Lamar Cos. and Real Capital Solutions have purchased a 293,550-SF lifestyle center near Philadelphia as the partner's sixth retail center acquisition in the past five months.