NEW YORK CITY-Passage of the Greener, Greater Buildings Plan occurs on the eve of Mayor Bloomberg's appearance at a UN climate change conference in Copenhagen.

NEW YORK CITY-A few days before Mayor Michael Bloomberg is scheduled to travel to the United Nations Climate Change Conference in Copenhagen, the City Council passed a package of bills which Bloomberg considers a pillar of his administration’s PlaNYC sustainability program. The Greener, Greater Buildings Plan is expected to reduce the city’s carbon footprint by nearly 5% by focusing on existing buildings. “While New York already has the lowest per capita carbon footprint of any major city in America, we recognize that every city must take action to fight climate change,” Bloomberg said at a news conference Wednesday evening.

Three of the four bills apply only to residential and commercial buildings of 50,000 square feet or more. Among other things, the GGBP creates a New York City energy conservation code and implements standards for building performance benchmarking, lighting retrofits and tenant submetering, and audit and retro-commissioning measures.

One major change in the legislation since it was introduced in 2007 is the elimination of a requirement that large building owners follow up their energy audits with mandatory retrofits. Additionally, owners may waive the audit requirement if they are Energy Star or LEED for Existing Buildings-certified.

In a statement, Rohit T. Aggarwala , director of the Mayor’s Office of Long Term Planning and Sustainability, calls passage of the GGGBP “probably the most important single step among PlaNYC’s 127 initiatives to reduce our greenhouse gas emissions. Reaching our 30 by 30 goal”–a 30% reduction in the city’s carbon footprint by 2030–”will require progress on many fronts including renewable energy, transportation, transit-oriented planning, and open space, but addressing energy use in existing buildings is clearly the most critical issue for New York.”

The Urban Green Council, the New York chapter of the US Green Building Council, says in a release that the GGBP is “a major milestone in the improvement of our built environment and will certainly be viewed as a model for other cities in the US.”

The timing just before Bloomberg’s appearance at the UN conference is “impeccable,” the UGC says. “With heads of state gathered in Copenhagen to debate the means by which our global society combats climate change, all eyes will turn, briefly, to New York City.” However, the group notes that “the folks in Europe may not be impressed with the nuts and bolts of the bills” because European energy codes are “far more progressive than here.”

The City Council on Wednesday also passed the Food Retail Expansion to Support Health zoning and incentives program, intended to bring supermarkets that carry fresh produce to underserved, low-income areas. The FRESH program areas, identified in a 2008 report by the city, are located in the South Bronx, Upper Manhattan, central Brooklyn and downtown Jamaica. 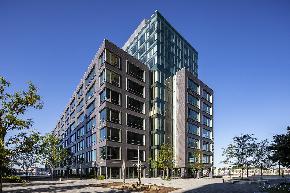 The firm has executed a new lease with Franklin Templeton, which brings the Baltimore office property to 91% occupied.