RIDGEFIELD PARK, NJ-The deal marks a turnaround for the former REO asset, which had been listed on Real Capital Analytics' "Trouble Asset Radar" earlier this year.

In June, Cushman’s Capital Markets group orchestrated the sale of the then-vacant 85 Challenger from AIG–to which 85 Challenger had been returned under foreclosure–to KABR, a value fund dedicated to the purchase of select real estate assets in the New York-metropolitan area. That all-cash transaction represented the tri-state area’s first post-Lehman large class A office building investor purchase.

“AIG, which is a lending institution and not in the business of operating office buildings, made the right decision to return this building to the developer market following its foreclosure,” Merin tells GlobeSt.com. “KABR took advantage of a great opportunity to purchase a well-located trophy property at pricing realistic for 2009. Samsung’s commitment is incredibly meaningful for the New Jersey office market from both an investment and leasing standpoint.” He declined to specify the asking rents for the building, but class A space in the state typically leases from the mid- to high-$20s per square foot.

“Our confidence in 85 Challenger stemmed not only from its quality and location, but also its historic occupancy rate, which exceeded 90%,” adds Kenneth Pasternak, chairman of KABR and a long-time real estate investor, as well as founder and retired CEO of Knight Trading. “We realized that as its owner we would be able to offer a fresh product at a greater value to tenants at other class A properties.”

Shortly after the purchase, KABR appointed the Cushman & Wakefield leasing team to market the building for multi-tenant use. The company also is adding a new full-service cafeteria and updating the building’s common areas and elevator cabs–improvements that complement a recent $1-million lobby remodel.

According to Trevisan, prospective tenants continue to show interest in the building’s remaining 40,000 square feet. “KABR is an aggressive landlord. It is difficult for other properties to compete with what we can offer.”

The building is part of the 60-acre Overpeck Centre, a mixed-use office park that serves as home to Bank of America and AGFA. It is the only office park in Northern New Jersey to have its own exit off the Turnpike. 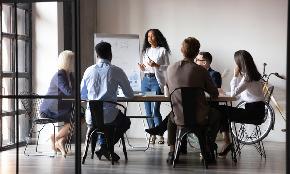 In a World of Machine Learning, You Need to Scoop Up Expertise

CRE companies are acquiring other firms and their know-how for a reason.