Apollo To Buy Cedar Fair for $2.4B

SANDUSKY, OH-Unitholders will walk away with $11.50 in cash per limited partnership unit when the theme park company goes private.

SANDUSKY, OH-Locally-based Cedar Fair LP has entered into a definitive merger agreement to be purchased by New York City-based Apollo Global Management. The deal is valued at $2.4 billion.

According to the merger agreement, unitholders will receive $11.50 in cash for each limited partnership unit. This figure is a 43% premium over Cedar Fair’s average closing unit price over the last 30 days, and a 28% premium over the closing price on December 15, 2009.

“This transaction allows Cedar Fair unitholders to realize significant value from their investment in our Company over recent trading levels,” says lead director Michael Kwiatkowski, in a statement. “Apollo has a strong track record of growing businesses and its desire to add Cedar Fair to its portfolio serves as a testament to our solid business model and the talent of our people.”

In March, Cedar Fair executives told investors an asset sale might be necessary to pay down mounting debt. At the end of December, Cedar Fair had $1.7 billion in long-term debt and $2.2 billion in total assets. Atthe times, Cedar Fair said it would continue its attempts to sell excess land in Toronto and Cleveland. Additionally, it considered selling its parks in Santa Clara, CA; Kansas City; and Shakopee, MN.

The company fell into debt in 2006 when it purchased five Paramount amusement parks for $1.3 billion from CBS Corp.

With the prolonged economic recession theme park companies have needed to make moves to secure their existence. As reported by GlobeSt.com in October, the Blackstone Group will pay up to $2.7 billion for AB InBev’s US theme parks.

At the end of November, St. Francis, WI-based Stark Investments was reported to be making a bid for Six Flags Inc., which filed for Chapter 11 bankruptcy protection in June. New York-based Six Flags owns 20 regional theme parks through the US, Mexico and Canada. 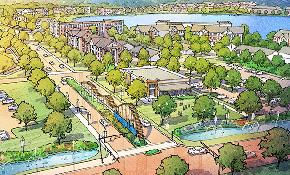 The Geauga Lake District will include retail, restaurants, residential and other commercial uses.