NEW YORK CITY – Legendary investor Warren Buffett was named the "Top Business Newsmaker" of the past decade in a Globest.com survey of real estate executives.

NEW YORK CITY – Warren Buffett, the chairman and CEO of Berkshire Hathaway, won in a landslide vote, taking the top prize of “Top Business Newsmaker” with an overwhelming 84% of the votes tallied. Federal Reserve Chairman Ben Bernanke came in at a very respectable 68% for second place, followed by former Fed chief Alan Greenspan at 35%.

Survey respondents showed their near reverence for the investor extraordinaire in their explanations for their selections of Buffett as their top pick. One noted, “His business opinion is respected by everyone. Even those who don’t like him want to know what he thinks.” However, the most complimentary by far went to one real estate executive, who wrote of Buffett: “When he breathes people listen.” 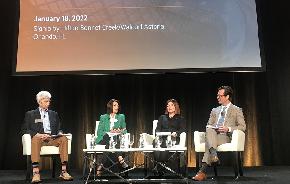