It's Hard Not to Feel Good About Industrial

DENVER—Speakers at Development '14's industrial panel here earlier this week said the sector keeps getting stronger; it's good to be a seller of industrial real estate these days.

Bill Hankowsky, chairman, president and CEO of Liberty Property Trust, said his firm’s business has “flipped from being a predominantly office company to a predominantly industrial company, so we’re trying to build out those sectors. Development is our goal now—not acquiring.” He added that his firm is building 500 million square feet of industrial product and is doing so “almost everywhere.”

Mike Curless, CIO of Prologis, said his firm will operate through three main levers this year, cycling worldwide through $5 billion of activity: selling $1.5 billion, buying $1.5 billion and growing AUM by buying and redistributing assets. “Supply is fairly moderated, although it’s spiking in some areas. It’s a good time to be in the sales part of the equation—it’s not as much fun to be a buyer.”  He added that his firm plans to acquire $450 million of US industrial assets this year, which keeps its team sharp.

Phil Hawkins, CEO of DCT Industrial Trust Inc., agreed that now is a good time to be in industrial real estate and a good time to be working with one’s portfolio. “Portfolio operations are where 90% of the value is going to come from. We couldn’t be happier with pricing.” He said his firm will sell $450 million this year and acquire a little more than that. “It’s a good time to be developing, but be aware of your balance sheet and strengthen it.”

With regard to land, Hankowsky said his firm is buying $140 million worth of land and is “burning up land as we move up development. We don’t want to pile it up. It’s pretty hard to find very good land in most markets, and as e-commerce increases, labor costs become a bigger issue. Lots of metros are filled out, and every piece is owned by a developer who’s going to use it.”

Curless agreed that land is a big issue and said his firm is “clicking through a lot of that land. We need about a 2.5-year supply, which is $1.4 billion, and we’ve got about $1.8 billion now. We will sell 40 to 50 parcels a year and are looking at striking a better balance in the future.”

Hawkins said the challenge with regard to land is the assemblage of it, not the ownership if it. “Know when to buy and when to stop. Always have more ready to develop.” He said his firm is looking at 1.5 years of inventory. “It’s harder to stop when you have land on your balance sheet—you don’t want to tell the world you’re slowing down.”

Meyer asked when the music is going to stop for industrial, and where the panelists see the cycle ending. “The recession was a very deep situation, and it was not cyclical,” said Hankowsky. “But we are back to the same number of people employed as in 2007. The regulatory environment today is so severe, there’s no need for a lending officer to take a risk; we’re in a slow-growth mode. I’d say we’re in the 4th or 5th inning, which is the perfect place for disciplined regrowth.”

Deep recessions = long recovery times, agreed Curless. For the future, he said, “We have an 80-year-old-lady strategy. We’re careful about acquisitions and keeping our leasing efforts up. We’re fairly optimistic about a good run.”

It’s hard not to feel good, said Hawkins. “Middle East money and Asian money are buying our Treasury. World events are significant, but the economy blows right through it. As far as supply, often recessions decrease demand—looking for yield advantage could create an overreaction with supply. We have permanent capital and are acquiring at low cap rates, selling equity. I’m in it and I’m all in. No one’s immune to a downturn, but it’s a ways off.”

Hankowsky said industrial is an attractive asset class, and institutional capital is in it “like never before. Pricing is blowing way past replacement cost. Financing is not there for spec builds since the lender and equity partner both need to be convinced. REITs are lowering their leverage ratios and have been relatively disciplined, but capital is creating unprecedented pricing, which could create overbuilding.”

Curless said his firm is deleveraging and taking advantage of the low interest-rate environment. “There’s still another 150 bps in interest rates before the cap rates level out, so we’re prepared for a little movement in cap rates.”

Hawkins added that his firm is in the institutional business, and Hankowsky said industrial is much more fragmented than retail, with REITs owning less than 5% of the market. “There’s room for consolidating.”

Hawkins commented that his firm would like to be bigger. “The theory of economies of scale is critically important. But we like where we are and we may not like the price of admission. We want to grow, but we haven’t figured out the right formula yet.”

Customers’ expectations of consistency are a challenge to growth, said Curless. “We’re driving unique advantages in our scale.”

Hankowsky acknowledged that there are two types of scale: company size and number of assets. “There’s a premium for scale on the acquisitions side. To buy warehouses, you have to buy hundreds.”

Curless said demand in the US is strong, and supply is still half of less than that. “The dearth of big box last year changed a little because almost all of the new supply was in the big segment. The small space is doing well, and that has to do with the recovery. E-commerce is the real deal—it should take 25% of total retail sales in the next 10 years. It’s the single biggest driver of activity today.”

Regarding design size, Curless said few users say they need 32 ft. ceiling heights but won’t take 36, so building higher is better—although he won’t build 42-ft. ceilings on spec for e-commerce—those will be build-to-suits.

Hankowsky said the strength at the moment is the smaller user, although 50% of his firm’s development last quarter was for e-commerce. “We have to be careful that the new product isn’t attracting a disproportionate amount of e-commerce.”

Ultimately, Hawkins pointed out that the look of traditional vs. e-commerce space is not all that different, and that the two designs are blending as needs converge. 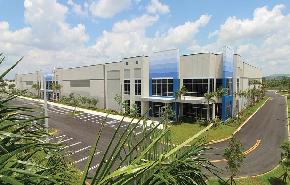 “Wastequip was exploring options from I-595 to Pompano Beach for distribution purposes to service the Tri-County area.”