CALABASAS, CA—The upper-midscale bracket has generated more property trades in the first half of 2015 than any other chain segment, according to Marcus & Millichap.

CALABASAS, CA—The lodging sector’s recent performance is giving rise to optimism that the exceptional momentum will extend well beyond historical cycles, Marcus & Millichap says in a new report. One macroeconomic trend that could create turbulence in the months ahead, though, is internationally sparked stock market volatility, the firm states.

“The recent turmoil in global equity markets illustrates the difficulty involved in anticipating unforeseen events capable of disrupting positive trends,” according to MMI’s report, with input from a team led by Peter Nichols, director, national hospitality group. In particular, the Federal Reserve’s timing on an interest rate increase, as well as the extent of its actions, could be affected by the markets’ uncertainty, triggering “a reconsideration among hotel owners of near-term objectives. An inevitable rise in the Fed Funds rate will likely affect the prime rate, a frequently used benchmark in hotel debt.”

At the moment, the hotel investment market remains liquid, with “considerable equity and competitive debt providers” both helping to sustain a high volume of transactions that are holding cap rates near cycle lows. MMI sees a tilt toward the upper midscale, with more properties trading in this bracket than in any other chain segment during the first half of the year. “More than half of these deals occurred in the 100 largest metros, but one-fourth took place in much smaller interstate, college and military markets to illustrate the ongoing search for yield,” according to MMI.

In general, MMI sees currently low interest rates and strong capital flows sustaining an “active and liquid” investment market. Sales of hard-branded hotels and independents were up for the first half of this year.

Looking at performance metrics, MMI sees records continuing to tumble in 2015. ‘The strengthening US economy will continue to put more business and leisure travelers on the road this year,” according to MMI’s report. National occupancy is forecast to jump 120 basis points to 65.6%, the highest annual level on record. “A bump in ADR will account for most of the gain in RevPAR,” the report states.

Helping to underpin these predictions is the momentum that several markets have begun generating. “In Chicago, higher travel volume supported a 12% jump in RevPAR through July, more than three times the rate of growth over the same span in 2014,” according to MMI. Meanwhile, occupancy in Atlanta has gone up 300 bps year to date to 72.9%, “while Sacramento rode a 7.5% rise in room nights to higher occupancy and a double-digit bump in RevPAR.”

Also registering double-digit bumps over the past 12 months has been hotel construction. Lodging Econometrics, based in Portsmouth, NH, says its United States Construction Pipeline Trend Report has now posted eight straight quarters of year-over-year growth, with double-digit increases for each of the past four quarters.

LE says the hotel construction pipeline is now at 4,038 projects representing 507,221 keys, up more than 20% Y-O-Y by room count. However, LE says the pipeline is 29% below the 2008 high of 5,883 projects and 785,547 keys. Analysts at the firm say that the number of new project announcements entering the pipeline is accelerating and think that the hotel real estate cycle has about two more years to go before peaking.

Columbia Pacific Advisors Bridge Lending provided the funding that will allow INDUSTRY GO to acquire 14-16 Burma Road and 150 Theodore Conrad Drive in Jersey City and convert them into 180,777 square feet of studio space. 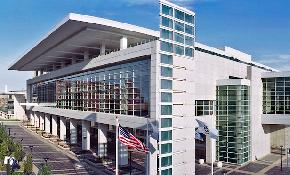