Experts Predict Up and Down Rates Under Trump

SAN FRANCISCO—Trump will put pressure on mortgage rates, with an increase expected to significantly reduce the already-small pool of buyers who can afford to buy a home in the Bay Area, while the corporate tax rate would be reduced to 15% and the maximum individual income tax rate would go to 33%, according to his latest proposals.

Despite being in the seventh year of economic expansion, the economy will continue growing through 2019 before slowing in 2020.

President-elect Trump will put pressure on mortgage rates, though it is not certain how fast rates will increase. Nevertheless, an increase in mortgage rates will significantly reduce the potential pool of buyers who can afford to buy a home in the Bay Area. The Bay Area real estate market is one of the few in the US classified as overheated.

Demographic changes will continue fueling demand as more millennials approach the age when they start their own households. Bay Area millennials will benefit from the transfer of intergenerational wealth from their parents and grandparents who help them with down payments.

More “surban homes”–those that offer urban-like living in a suburban market–will be built.

Across the entire Bay Area, home price appreciation averaged 7% so far this year when compared with the same period in 2015. Individual Bay Area communities fall into four categories when measured by year-to-date appreciation: normal, double-digit, heating up and declining. Normal (up to 10% appreciation)–The majority of markets fall into this category, including San Jose, Santa Rosa and San Francisco. The median home price in these markets averages $940,000.

Double-Digit (10 to 20% growth)–These markets include Oakland, Hayward and Petaluma. The median home price in these markets averages slightly above $500,000.

Heated (20 to 40% appreciation)–While no city-level appreciation exceeded 20%, some ZIP codes have recorded these levels of appreciation including those in Oakland, Berkeley, Cotati, Glen Ellen, Larkspur, St. Helena and East Palo Alto.

Slowing (6% depreciation to flat)–Cities in which median price is lower than last year include Palo Alto, Tiburon, Menlo Park and Lafayette. The median home price in these markets averages $1.7 million.

Cooling buyer sentiment is evident in almost all markets. Fewer homes are selling above asking price in 2016 across the Bay Area, particularly in San Francisco, San Mateo and Santa Clara counties, and in higher price ranges. Premiums paid this year are also smaller in all counties.

Overall Bay Area inventory has increased by 5% year-to-date when compared to last year, with San Francisco and San Mateo counties having the largest gains. The buildup in inventory levels is mostly among homes priced between $2 million and $3 million.

Bay Area job growth will continue to outpace the number of homes built in 2017. The majority of new construction is concentrated in San Francisco, while no new supply is occurring outside of the city.

The new supply is mostly in higher price segments, so even though the ratio of new employment to new permits may be falling, it does not reflect the true availability for the average worker.

The number of new San Francisco condominiums for sale has spiked in the second half of 2016 but will begin slowing during the next three years.

With regard to commercial real estate, Chen tells GlobeSt.com. “While it’s obviously early and things could change, Trump’s tax proposals would appear to have broad reach. Under Trump’s current plans, the corporate tax rate would be reduced to 15% and the maximum individual income tax rate would be reduced to 33%, all in an effort to spur economic growth. His anticipated tax reform would also include repeal of the 3.8% tax on net investment income and repeal of the estate tax. Finally, his intentions indicate US companies with profits parked offshore would be able to repatriate the earnings at a fairly low tax rate of 10%. To what extent Trump fulfills his campaign promises remain to be seen. One thing is certain–the likelihood of tax reform is higher in the wake of Republican control of the House and Senate.”

Real Estate Survey: Worst May Be Over But Some Sectors Still Struggle

RCLCO’s sentiment survey predicted that following a pandemic-driven plunge, some sectors of the real estate market are "coming off the bottom." 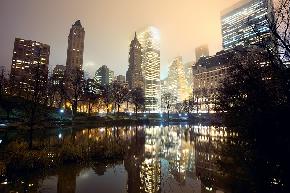 “But with New York City having entered Phase 2 of reopening in late-June and pockets of New York State already in Phase 4, there are promising signs of a recovery in the second-half of the year,” says Colliers’ Franklin Wallach.