It will take creativity, but the affordable housing crisis is one that will not be ignored by lenders, investors or developers. Besides, tax credits may not be the sector’s biggest issue.

CLEVELAND—The recently enacted tax reform bill was met with a less-than-enthusiastic response by players in the affordable housing market, as phrases such as “a blow to it” and “gutting it” have made headlines. Indeed, it looks like tax reform, left to its devices, would leave a lot of affordable housing occupants both literally and figuratively out in the cold.

GlobeSt.com: So how serious is this? Let’s apply some perspective here.

Robert Likes: The issue really goes back to the 2016 campaign. When the new president was running, it was on a platform that included lowering corporate tax rates–as low as 15 percent. After the election, the possibility froze the affordable markets and caused many developers, owners and investors to sit on the sidelines. But eventually the market settled in. Then the bill passed at 21 percent.

But going from a 35 to 21 percent corporate tax rate, along with the reduced LIHTC equity—by about 14 percent—represented a real double hit for commercial real estate professionals in affordable housing. That 14 percent equates to about $1.7 billion in equity on an annual basis.

GlobeSt.com: We know the situation is dire. Put a profile to that if you will.

Likes: There are a lot of statistics out there, and they’re significantly understated. There are thousands of units needed, virtually in every city in the US, and they are all coming up short at all income levels, from extremely low to middle income and workforce housing. And it’s not just in the inner cities. It’s in the suburbs as well. It’s really a national housing crisis, and it continues to grow.

GlobeSt.com: But the market is still very active, yes?

Likes: We’re still seeing strong competition and strong investor demand, albeit at lower pricing for equity. We’re seeing multiple bids and offers to purchase tax credits, and it’s still a competitive market, but it’s just reset at a lower amount. Also, debt execution for affordable actually went up last year, so that tells you there are other solutions and more capital flowing into affordable housing, so maybe the country is waking up to the issue.

But I want to pivot and say that the number-one concern right now for the housing crisis is increasing interest rates, followed by increasing construction costs, then lower LIHTC pricing. Interestingly, the spending bill that just got passed on March 23 actually included a provision to increase the LIHTC allocation by 12.5 percent for four years and permanently allow income averaging, both of which will boost things a bit.

GlobeSt.com: But that won’t get us back to where we were.

Likes: No. It doesn’t get us back to where we were, and so we need to continue working to create more programs.

GlobeSt.com: What does this mean for investors as well as for occupants, and what is the impact on product availability?

Likes: We were talking about investors in tax credits. We at KeyBank maintain our appetite. Every investor is a little different, of course. You may see some pure yield-driven investors take a pause, as opposed to the Community Reinvestment Act investors, who’ll continue to be strong, albeit at that lower pricing. We can’t confuse the demand for tax credits with the demand for affordable housing, which is unlimited.

GlobeSt.com: Where’s HUD in all of this?

Likes: HUD provides good debt programs, and they’re also a critical component of gap money for affordable housing. As we’ve seen approved March 23 through the spending bill, the HUD budget got approved at a 10-percent increase from last year, which is a good thing. Those debt programs help fill the much-needed gap in affordable housing executions because of everything we’ve talked about–the tax credits, the interest rates and construction costs. So, including Fannie and Freddie and other lenders, there are a lot of good capital sources for affordable housing.

GlobeSt.com: And what does it all mean for KeyBank?

Likes: We’ve been increasing about 30 percent per year, both in dollar volume and in our number of transactions. KeyBank’s corporate stated purpose is to help clients and communities thrive, and that certainly includes affordable housing, which is the largest component of my group. When we acquired First Niagara in 2016, we made a commitment to invest $16.5 billion over five years to the communities where we live and work. And for my team, that is every state in the US. While there are several components to the plan, more than $8 billion will be community development lending and affordable housing projects.  Last year, the first full year of the plan, we exceeded our goals by hitting $2.7 billion. At the end of five years we will keep doing this work because it is good and meaningful business with mission-driven impact.

What’s important for the country to understand is that the need for affordable housing will grow and that gap won’t narrow. It’s important that we all find solutions to help provide more capital to the industry. The good news is that there has been a lot of attention put on the issue and more investors, owners and banks getting involved. We’re hopeful that we will continue to see lots of creative strategies develop over the coming years. 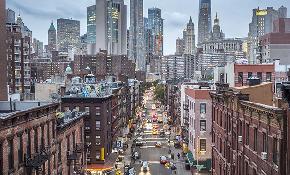 “’Mission’ is the mission,” says KeyBank Real Estate Capital SVP Dirk Falardeau as he breaks it all down for GlobeSt.com readers.