The renovation is providing Trinity Plaza with a new facade, including several new raised sections for visibility and identification, and a new monument sign, landscaping and LED-lit signature towers.

CARROLLTON, TX—A major renovation is now underway at Trinity Plaza, a shopping center that opened during the 1970s at 2510-2540 N. Josey Lane and State Highway 190/President George Bush Expressway. The renovation is slated for completion in the third quarter of 2018.

The rehab is providing the center with a new facade, including several new raised sections for visibility and identification. Also in the re-energized design will be new landscaping, lighting, parking, LED-lit signature towers and monument signage. 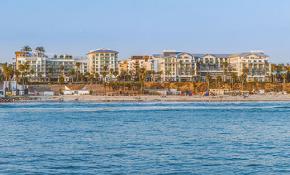