Washington, DC Bears The Brunt Of Most GSA Lease Downsizing

Downsizing has been felt in markets across the United States, but it is particularly acute in the National Capital Region.

WASHINGTON, DC–Since the end of 2012, GSA has been actively working to reduce the size of its leased footprint. Progress has been modest but consistent. At its December 2012 zenith, GSA leased 198.6 million square feet of space (MSF) across the United States. Since then the agency has shed almost 10.9 MSF, yielding an overall reduction of 5.5%.

This downsizing has been felt in markets across the United States, but it is particularly acute in the National Capital Region. Of the nearly 10.9 MSF of net space vacated by federal agencies nationally, 8.3 MSF (77%) of it has occurred in that dot on the map that is the Washington, DC metro area.

Ironically, the existence of so much federal space in the nation’s capital has made it easier for GSA to consolidate leases and it it has provided more opportunities to shift agencies into federally owned buildings. An additional factor is that the Washington area has ample availability of commodity office space providing GSA with leverage to Implement its downsizing plans. In regions where such competition doesn’t exist the negotiating fulcrum moves in favor of lessors, enabling them to better hold the line on occupancy. 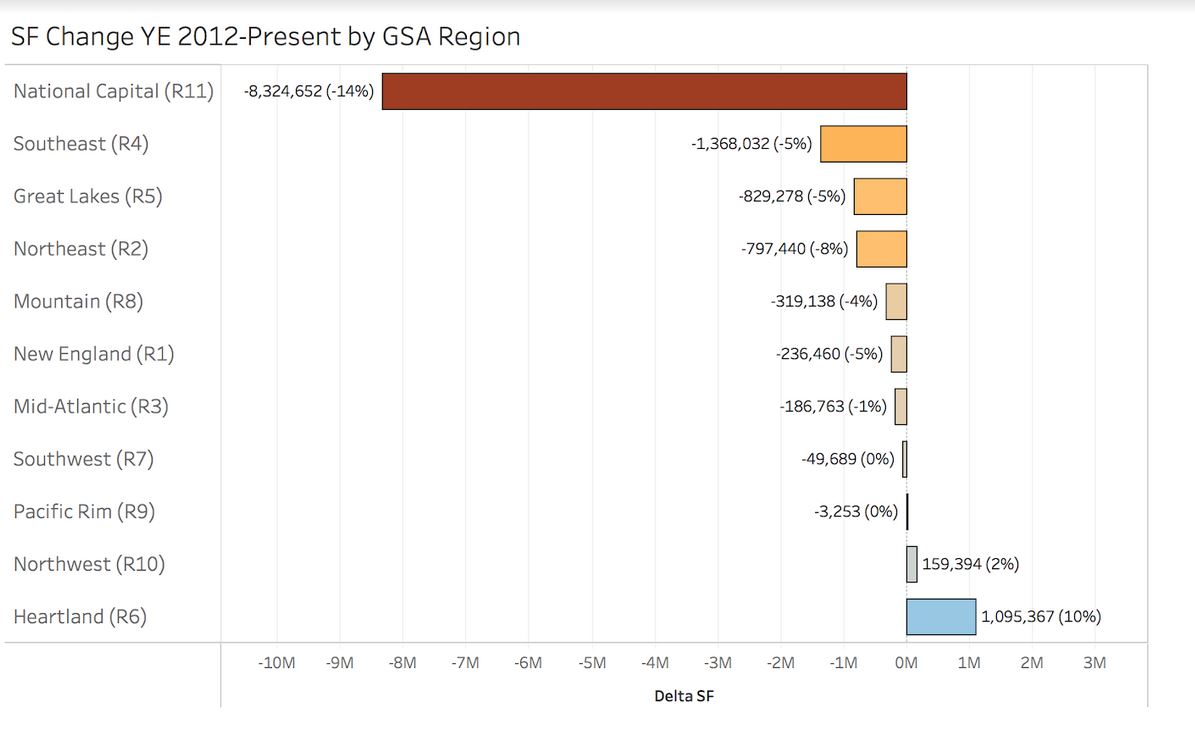 To view a map of GSA regions, click here.

For all of the reasons above, similar dynamics are playing out on a smaller scale in markets like Atlanta, Chicago and Denver that house regional concentrations of federal space. Cutting against the trend is Kansas City, where the federal government closed its Bannister Federal Complex (an owned facility) and relocated both the National Nuclear Security Administration (1.5M RSF) and GSA’s regional offices (151,000 RSF) to leased space. Notwithstanding those additions to the leased inventory, the square footage delta in the Heartland Region would also be negative. Downsizing is underway at some level throughout most of the nation. But Washington, DC has proven itself particularly vulnerable and that’s a trend that is unlikely to change in the near-term.