Does the World of Extreme Adventure Apply to Business Environments?

SAN DIEGO—In the opening general session at CREW Network Convention and Marketplace, Wendy Mann, CEO of Crew, began by asking the audience or more than 1,200 if they have ever been ever been asked to take on a job they thought was out of their reach or that demanded skills they didn’t have.

She shared a story about a New York City bike ride race that she rode with her husband, where the moment she wanted to give up, she pushed forward and ended up finishing the race. She encouraged the audience that the moment they might want to give up, they should look for your biker that might encourage them. 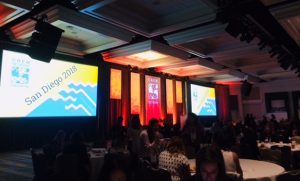 Mann continued to talk about motivation, obstacles, and overcoming moments where you take on something, make a change, or take on a project that is different or new. “Get on that bike and go. You should always say yes and accept that opportunity. Understand you don’t always need to have all the knowledge or skills, you just need to commit. Gear up in your own life and get the skills you need.”