In its goal toward building the largest smart city, San Diego is launching new smart city apps and lighting controls from Current by GE.

San Diego is on the path to building the largest smart city IoT platform. In its partnership with Current by GE, the city has announced plans to launch new smart city apps and lighting controls. The apps will help residents navigate and improve parking, traffic and public safety on city streets. For the lighting, the city is adding 1,000 CityIQ sensor nodes paired with a control utility interface. This lighting control is the first of its kind and will increased LED streetlight efficiency by 20%.

“The most recent expansion in scope and capabilities is really a continuation of a journey,” Austin Ashe, co-founder and general manager of Intelligent Cities at Current by GE, tells GlobeSt.com. “Adding 1,000 more CityIQ nodes allows for even richer data sets over a larger geographic area, including underserved neighborhoods that traditionally under-report issues. By commissioning a package of apps and CityIQ hardware together for the first time, Current is providing a turnkey approach that demonstrates how the new infrastructure can ultimately spawn entrepreneurship, create jobs and solve problems much like the app store did for the smartphone.” 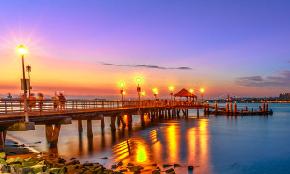