The UCLA team won the annual challenge with a proposal to transform 11 acres at the former Tustin Marine Corps Air Station into a campus with hotels, multifamily, affordable housing and retail. 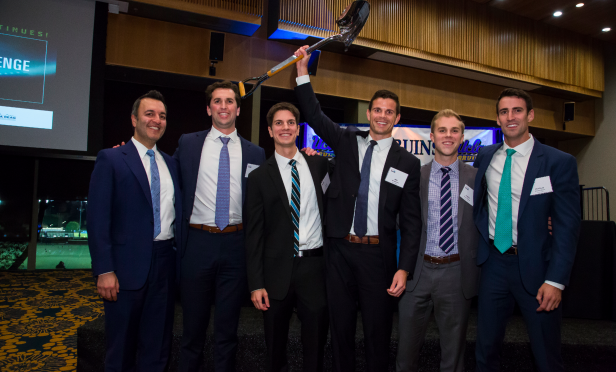 The graduate student team from the Ziman Center of Real Estate at UCLA’s Anderson School of Business has won the Silver Shovel at the annual NAIOP SoCal UCLA vs. USC Real Estate Challenge, defeating the graduate team at the Lusk Center at USC’s Marshall School of Business and Price School of Public Policy. This year, the challenge focused on placemaking, asking teams from both schools to reimagine an 11-acre land site on the former Tustin Marine Corps Air Station. UCLA’s winning proposal included two select service hotels, 240 multifamily units and 75 units of affordable housing with 10,000 square feet of supporting retail as well as a common-area community space with garden courtyards and outdoor movie theatre.

“Both schools presented similar visions in terms of product type encompassing a hotel use, housing and supporting retail,” Mark Mattis, SVP at PMRG and the NAIOP SoCal Real Estate Challenge Chair, tells GlobeSt.com. “UCLA’s proposal, called Solanna, included two select service hotels, 240 multifamily units and 75 units of affordable housing with 10,000 square feet of supporting retail. The site encompassed a central common-use community space with garden courtyards and outdoor movie theatre.   All in all both schools presented amazing development plans which took into account the City’s objectives. I think the caliber of thought and implementation in the planning underscores the strength of both schools’ real estate programs.”

Like every year, the scoring was extremely close as both teams presented creative and innovative ideas to transform the site. This year’s challenge was unique in that it focused on placemaking and dealt with a municipality as the client. “The owner of this year’s subject site is a municipality, the City of Tustin,” says Mattis. “They are basically the “client” at this event and the students present to them along with the judges who score their proposals. Although we have worked with other cities in past competitions such as the City of Inglewood in 2016, municipalities have unique goals for their projects that typically differ from a developer.   This year the students had to focus not only on financial viability of this 11-acre site off the 55 but they also had to incorporate the goals of the City which included increasing and diversifying revenues while creating high quality jobs and housing.”

Multifamily’s Summer Recovery is Dialing Back a Bit Lately