The port’s long-term goal of moving 50% of cargo by rail is inching closer with several new rail expansion projects in place and a $1 billion commitment from the Harbor Commission. 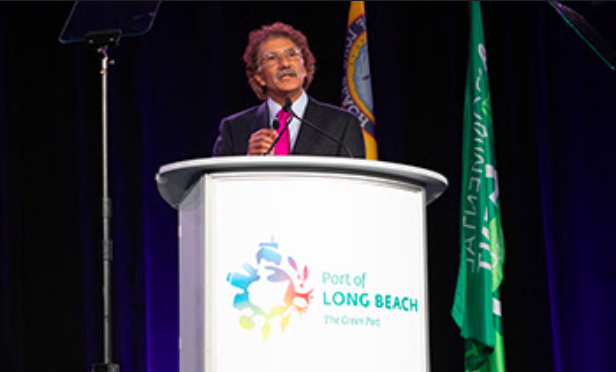 The Port of Long Beach is inching closer to its pioneering goals for rail—all part of an effort to create a greener and more efficient port. At the annual State of the Port address, Mario Cordero announced several plans to expand and improve the Port of Long Beach’s dock rail system, including a $1 billion commitment from the Harbor Commission for train improvements. The port has a long-term goal of moving 50% of all cargo by dock rail, but these improvements, once complete, will bring the port to 35% this year.

“This is visionary. This port is taking the lead in rail,” Cordero, executive director at the Port of Long Beach, said at the State of the Port address. “Rail allows us to move goods to and from all major US markets much faster than cargo through the Gulf and East Coast ports. This is true of imports and exports.”

The improvements will also include the so-called Pier V project, which will build a second rail track from Pier V to Pier J. The port also plans to close the 9th Street crossing in March, which Cordero said will help trains to move faster and more efficiently. We are furthering our commitment to on dock rail and operational excellence,” he said, adding that the benefits of rail are ample. “The delivery of containers to and from ships by train is the most sustainable and efficient way to move cargo in and out of the port. Each train eliminates as many as 750 truck trips, speeding the flow of goods and cutting traffic on roadways. Train is a big part of our green future.”

Urban Machine claims its system can remove nails and staples.