Many investors are focusing on properties in secondary markets and alternative asset types, according to a new CBRE report.

It is late in the cycle and commercial real estate investors are getting antsy about where to place their money. The appetite for risk is lessening and even in some cases changing the perception of certain investments, according to CBRE’s 2019 Americas Investor Intentions Survey. There has been a shift toward greater caution, the survey shows, with the share of investors planning to either maintain or increase spending in 2019 falling to 75% (from 88% in 2018).

The answer, for many investors is to look for properties in secondary markets and alternative asset types.

“Pricing is at or near the previous peak for most asset types in prime locations, so investors are seeking yield in secondary markets and alternative asset types,” said Chris Ludeman, Global President, Capital Markets, CBRE.

Investors’ view of secondary markets are changing as strong employment growth, in-migration and investment have transformed many of these cities since the last economic cycle.

This is not to say that  investors are less interested in the large US markets. Los Angeles/Southern California has been the top-ranked metro in the Americas since 2016, CBRE says in its report, followed by Dallas/Fort Worth.

However, as more investors shift their attention to smaller markets, half of the Tier I markets moved down from last year’s rankings and two were unchanged. Washington, DC rose to the third position. 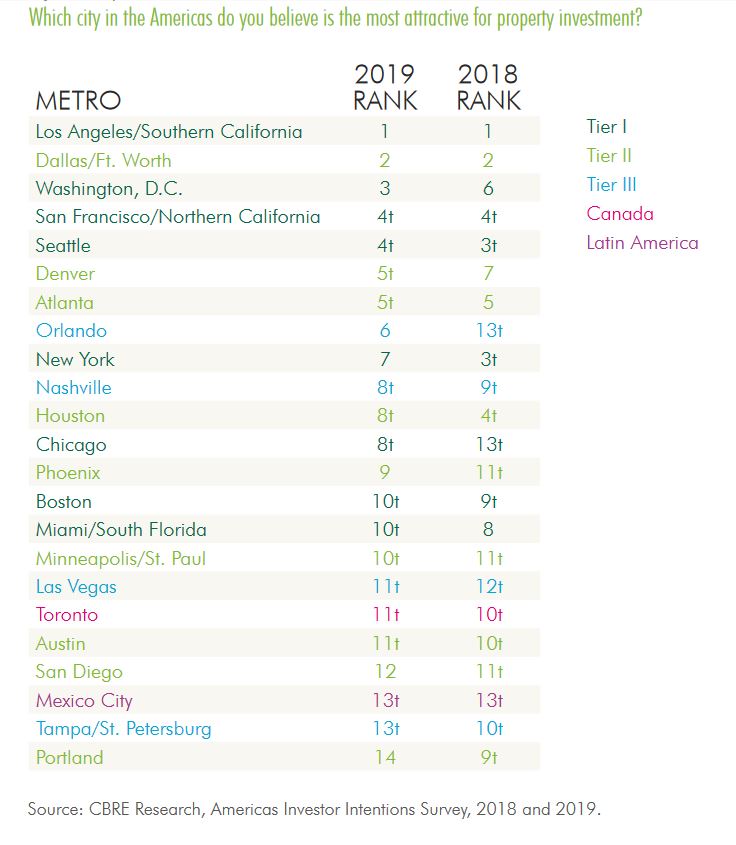 In contrast, most Tier II and Tier III metros have been steadily moving up the ranks. Denver, Phoenix, Orlando, Nashville, Minneapolis/St. Paul and Las Vegas all climbed in the rankings for the third year in a row. Tampa, San Diego and Portland were not as popular as last year but remain ranked higher than they were in 2017.

Among the rising Tier II and Tier III markets, only Denver and Phoenix appeared as recently as 2016 when Denver ranked 9th and Phoenix 16th. Toronto and Mexico City were the only non-U.S. top-ranked markets in this year’s survey. Toronto moved down slightly to tie for 11th and Mexico City held steady in a tie for 13th.

The Growth in Alternative Assets

The survey also showed that 40% of respondents are actively pursuing one or more real estate alternatives. Real estate debt remains the most common of the niche sectors (52%), with self-storage, seniors housing, and student housing the next most popular—each favored by nearly 30% of investors.

Self-storage, seniors housing and student housing are the next most popular alternatives, each favored by nearly 30% of Americas investors.

Overall, the survey shows that investors will remain active in commercial real estate markets this year, with 98% of respondents intending to make acquisitions. That said, concerns by investors include a global economic downturn (36%), with the share rising for the third consecutive year. Rising interest rates have been the second-biggest concern for the past three years (17%), although this share is essentially unchanged from last year and is less than in 2017. 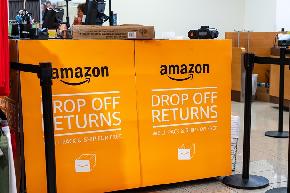 Stockroom operations are a crucial component when distribution is added to the mix. 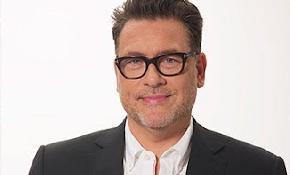 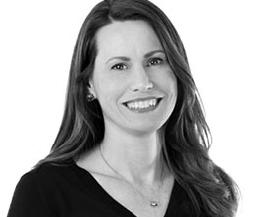 “You have to lead from a place of firm conviction about what you are trying to accomplish and what your values are that drive how you accomplish goals."