The panelists also talked about the fears of a recession, interest rates and where we are in the cycle. 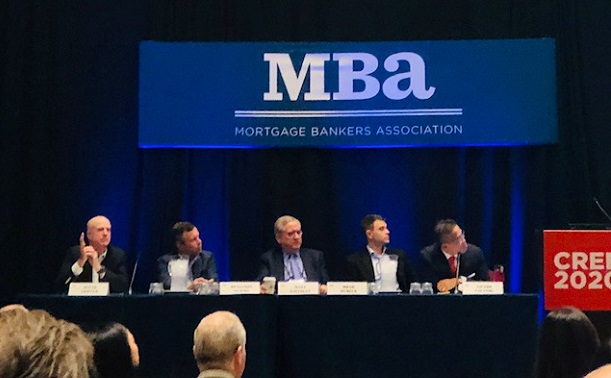 Along with moderator Victor Calanog, head of CRE Economics at Moody’s Analytics REIS, panelists discussed what larger industry and economic trends are impacting their operations and balance sheets and how various players are responding.

Calanog began by noting that CMBS has made a significant comeback. He also noted that when you take a look at overall lending volumes, the last high was around $4.5 billion in 2007. That number, he said, dropped significantly in the following years. “By 2015, we had surpassed that. MBA’s estimate for 2019 is at or around $628 billion.”

Benjamin Stacks, CRE line of business executive at BankUnited, noted that rates are still very low. “I hate the whole inning thing, but I don’t know we are in any inning. I think that as long as rates remain low and the Fed is taking the position that it is, we are in a good place,” he said. “Things like the Coronavirus or election this year can be a down draft of what happens so it is time to be cautious but there are a lot of positive indicators.”

As for which sectors are still hot in the lending space, panelists said that there is a lot of opportunity in industrial in the build to suit space. “There is opportunity in residential as well, but industrial is the obvious sector where a lot of capital continues to be deployed,” said one panelist. “For most portfolio lenders, there is allocated capital to the industrial sector.”

Stacks said that while industrial is great, he wonders if it will become too much of a crowded tree with all the emphasis being put on it. “I think there are other spots of opportunity. For us, retail is ok. We still see some pockets of strength. We would consider it for the right people and the right situation. The black swan of the rent regulation changes that just happened in NY, it reminds you that things can come along that happen that are not underwritten when you look at stuff so you have to be careful of that. We are a sponsor driven company. We look at new opportunities and make sure we are having relationships with people and understand their needs. As to asset classes, we are pretty open, but maybe not condos in New York.”

Matt Galligan, Vice Chairman of Real Estate Finance at CIT Group, said that his company isn’t doing any retail, but he did say they should allocate some because there are some that make sense in that space. He also noted they are cautious on condos and multifamily. “We are looking at a specific deal in a specific market more than ever rather than a general approach to doing suburban office for instance.”

He added that his concern with industrial is that it appears that there is a long cycle but in many cases the deals are small and the deals are specs. “It is hard to make money on industrial deals because you aren’t putting that much money out. It is very particular to the location. We have done some last mile deals in New Jersey and at JFK airport. We feel very comfortable in those two areas but I wouldn’t want to do a lot of industrial off an exit in New Jersey where there isn’t a lot of land.”

When asked about concerns, Stacks said that his company takes a much longer view because in their business, they aren’t traders making bets on a sector play or a couple of deals because they think it will be a good outcome. Instead, they take a longer view and focus on developing relationships and having repeat business with people. “Whatever comes down the pike, we feel that those we are doing business with will be able to ride it out. I don’t think any of us up here are worried about our last dollar risk.”