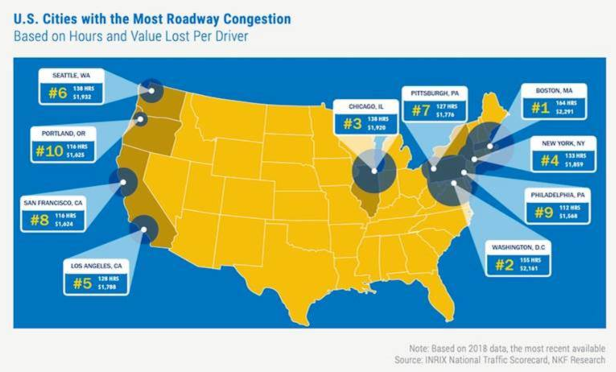 Los Angeles traffic is a very real factor in corporate decision-making. A new report measuring roadway congestion from Newmark Knight Frank ranks Los Angeles fifth in the nation for traffic, behind Boston, Washington DC, Chicago and New York. In the tight labor market, traffic is becoming a major concern for companies, with 41% employees choosing to leave a position because of commute times.

“Traffic congestion and employee drive times continue to be a very real factor in corporate decision making with respect to physical office locations throughout L A,” Alex Bergeson, managing director at NKF, tells GlobeSt.com. “Many of the companies who have recently made decisions to grow and expand in Culver City are going to be vacating locations in the beach cities—mainly Santa Monica—because the connectivity to the entertainment world, based in Hollywood, is being hindered by traffic patterns. With a more central location in a submarket like Culver City, employers can pull from the labor force in the beach cities, while still being in proximity to Hollywood and the entertainment markets.”