Homeownership Has Been Declining for Generations

Homeownership is declining overall, not only for millennials, according to a new report from Apartment List. 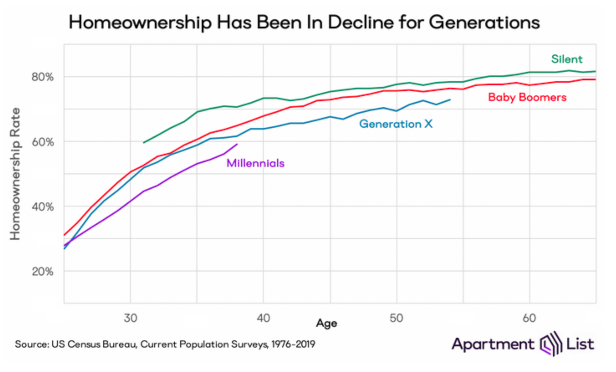 Millennials aren’t the only demographic with waning interest in homeownership. Homeownership has been declining for generations, according to a new report from Apartment List. The trend shows that each generation has a unique relationship with purchasing a home, seeing a shrinking relationship between wealth and homeownership.

“I think that while homeownership has always been viewed as a powerful vehicle to wealth creation, each generation has had a unique relationship with the housing market. We see the highest homeownership rates for the silent generation, which comprises a lot of WWII veterans who came home from war to a huge housing boom and an economy that was largely centered on building homes,” Rob Warnock, research associate at Apartment List, tells GlobeSt.com. “Suburbs continued to flourish as boomers came of age, but obviously for gen-X and millennials the momentum was curtailed by the Great Recession and slowly worsening shortage of affordable housing.”

Of all the demographics, millennials are the least likely to own a home, according to the list, but the most likely to by one today. The reason is complicated.  “On one hand, millennials have a slightly different perception of homeownership than their parents. Since so many have clustered in expensive urban areas and delayed starting families, it’s more common for millennials to embrace renting and the flexible lifestyle it affords,” says Warnock. “Coupled with that is the reality of supply and demand in the housing market. There is a huge shortage of affordable homes in the places that millennials want to live, and many are unwilling to move out to the suburbs or start super-commuting just to be able to buy a home. Instead, they continue renting.”

The impact of waning homeownership has had an impact on economic equality over the long term. “It certainly plays a role in economic equality across the country,” says Warnock. “We know that income inequality is worsening, and this is in part because so many young people today are unable to transition from paying rent to paying a mortgage. Consider that today, the net worth of homeowners in America is over 40 times that of renters.”

Income also plays an important role, with lower income families less likely to own than higher income earners. New home construction is important to bring home prices down and get more people into homes, and prior to the recent economic disruption, new home construction was expanding. “There’s obviously a lot of uncertainty about the future of the economy at this specific moment, but from the end of the Great Recession until today, housing construction has been expanding rapidly,” says Warnock. “Both single-family and multi-family are growing, but multi-family has grown much faster. Increased demand for housing in urban centers, plus younger people embracing the renting lifestyle means that it’s easy to fill vacancies in cities. So it appears like that’s where most of the new investment is going. Unfortunately we see that in a lot of cities, new construction is being concentrated at the luxury end of the spectrum, which doesn’t immediately benefit the vast majority of people, young and old, looking for affordable housing.”