Here are the Metros With the Most Employment Risk

By the time all is said and done, every industry and region will be impacted by the dramatic decline in economic activity, though the impact will vary by metro.

Two weeks into the strict social distancing that has put most of the country under stay-at-home orders, some 9.9 million Americans have filed unemployment claims. The number is expected to grow as more states shut down schools, retail establishments, public buildings and offices in an effort to “bend the curve” and stop the spread of the Covid-19 virus.

By the time all is said and done, every industry and metro will be impacted by the dramatic decline in economic activity (Goldman Sachs, for example, forecasts GDP to fall 34% in 2Q20), though the impact will vary by metro.

The segments expected to see the most job losses are lodging and hospitality, retail trade, and mining, logging and construction. Business and leisure travel have ground to a halt, and hotels are operating at a fraction of capacity, with little chance that will change until the summer at earliest. Most states have ordered most non-grocery retail establishments to close, throwing many hourly retail and restaurant workers out of work. In many states, restaurants that remain open can only do take-out business.

Some states have ordered non-essential construction to cease, and materials and labor are increasingly hard to find. Energy, more concentrated by metro than other job categories, has seen oil prices collapse to their lowest levels in decades. Demand for gasoline has fallen sharply as people avoid travel, while drilling and exploration become money-losing propositions when oil is pricing at multi-decades lows.

The U.S. unemployment rate jumped to 4.4% in March from 3.5% in February as the economy shed 701,000 jobs, according to the U.S. Labor Department. The data only captures some of the job losses, which started in earnest in the middle of the month, and unemployment is expected to climb over 10% in the second quarter. In March, leisure and hospitality lost 459,000 jobs (417,000 in food and beverage establishments), while retail was down 46,000 jobs and mining, logging and construction was down 36,000 combined. Other segments also lost jobs during the month, including health care (-61,000), professional business services (-52,000) and manufacturing (-18,000).

Where Jobs Are at Risk

Yardi Matrix examined the Top 50 metros in total employment to determine which have the highest percentage of combined jobs in the three most at-risk categories. Las Vegas (49%), Southwest Florida Coast (44%), Orlando (41%), Ft. Lauderdale (36%) and Houston (35%) led the list. Each of those metros are heavily dependent on one or more of the most affected job categories. The Las Vegas and the Florida economies depend on travel and tourism, while Houston’s economy remains driven to a large degree by energy.

Larger metros with more diversified economies have the least dependence on the three at-risk job categories as a percentage of total employment. Washington, DC (25%), and San Francisco and New York (each 26%) have barely one-quarter of jobs in the most at-risk segments. Washington’s economy is driven by the federal government, while New York and San Francisco are centers of finance, media and technology.

Even the most diversified economies, however, will feel the pain of job losses, in part because diversity comes with size. New York has 1.9 million jobs in the three most at-risk categories, by far the most in the nation. Three other metros have more than 1 million total jobs in the at-risk segments: Chicago (1.4 million), Los Angeles (1.4 million) and Houston (1.1 million), which suggests that the impact will be spread out, even in metros with a smaller percentage of jobs at risk.

It is notable that the fastest-growing metros in the Southeast and Southwest have the most exposure to our at-risk segments. Las Vegas, Orlando, Houston, Miami, Austin and Charlotte – all in the top 15 in percentage of jobs at risk – have consistently ranked among the top metros for job and population growth over the post-financial crisis economic cycle and have been top targets of capital inflow from commercial real estate investors looking for more rapid growth.

At the same time, traditional “primary” markets such as Washington, DC, New York, San Francisco and Boston – which are highly liquid but have lost some of their luster with investors seeking growth – have proportionately fewer at-risk jobs. How each metro fares through the pandemic will provide a test, and the differences demonstrate the importance of differentiating investment strategies between potential rapid growth versus stability and diversification. 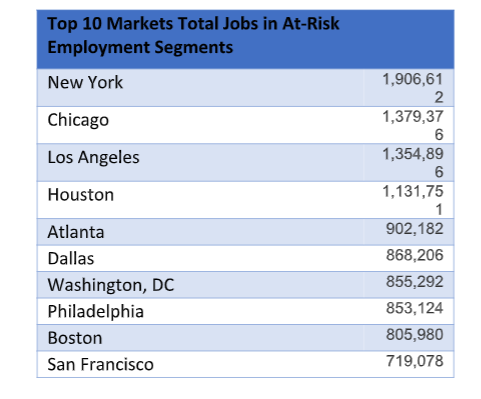 Not surprisingly, Las Vegas (28.9%) and Orlando (19.6%) stand out as the metros with the highest percentage of workers in leisure and hospitality. Other metros with at least 13.0% of workers in the segment include Southwest Florida Coast (15.9%), Orange County, Calif. (13.9%), San Antonio (13.5%) and San Diego (13.4%). Northern New Jersey (9.2%) has the lowest percentage of workers in the segment, followed by Salt Lake City, Bridgeport-New Haven, Conn., and Philadelphia (all 9.2%). New York, Los Angeles and Chicago have the most jobs in this segment. 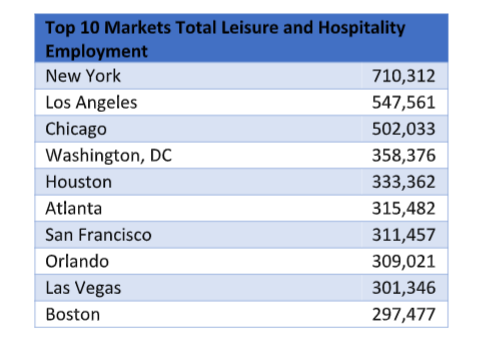 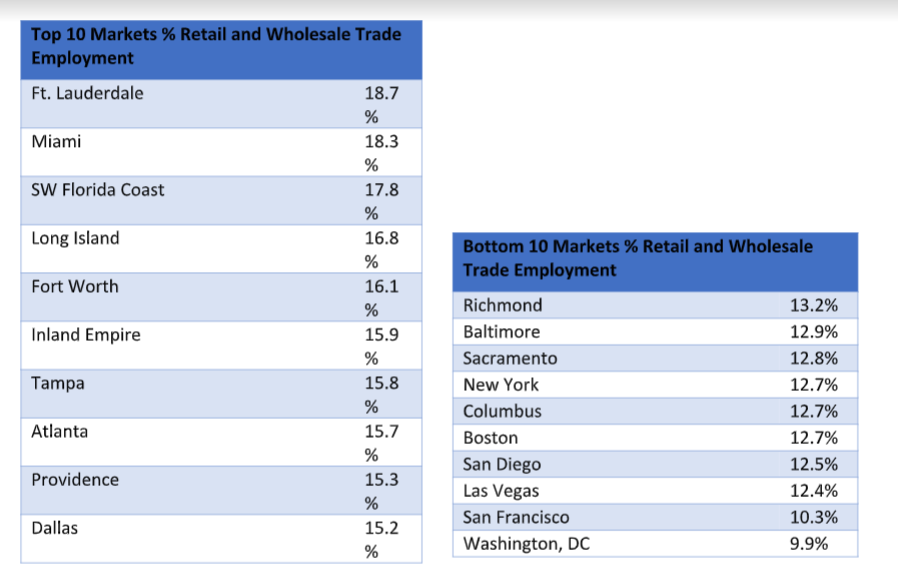 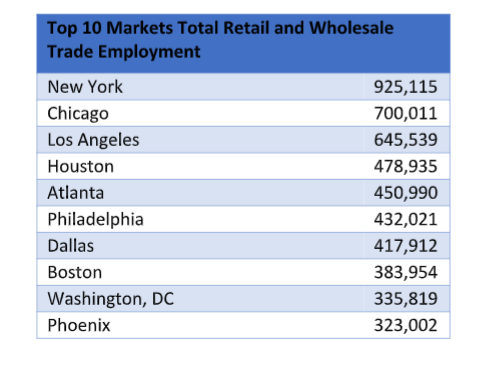 Southwest Florida Coast (10.6%) and Houston (10.0%) have by far the greatest share of workers in the mining, logging and construction segment, followed by Denver (7.4%), Las Vegas (7.3%) and Salt Lake City (7.2%). Bridgeport-New Haven (3.3%) has the lowest share of jobs in the segment, followed by Los Angeles (3.5%), and New York, Chicago, Northern New Jersey, and Detroit (all 3.7%). Houston, New York and Chicago have the highest total number of jobs. 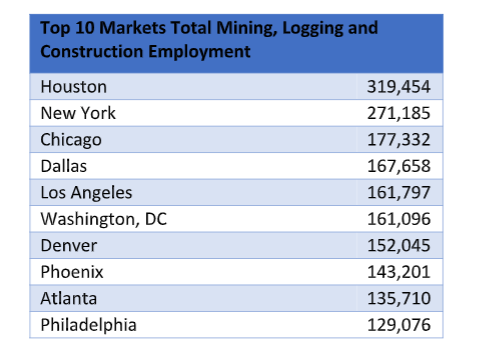 Our ability to determine the full extent of the economic damage is limited by the uncertainty about when the spread of the virus will peak, how long social distancing measures will remain intact and how long it will take to produce a vaccine, among other issues. Plus, orders to socially distance have been implemented unevenly in different states, and some states could remove restrictions earlier than others going forward.

That said, recent events make clear that every major metro faces the prospect of significant job losses. Over the last two weeks of March, 24 states topped 100,000 in unemployment claims, led by more than 1 million in California and 780,000 in Pennsylvania. Some metros, by virtue of the composition of jobs, clearly are more at-risk than others. Las Vegas and Orlando, whose economies are heavily tied to tourism, are likely to be hard hit and recover slowly. Metros such as Houston and Midland-Odessa, Texas, which are dependent on energy prices, also will feel the impact more deeply.

The impact of these losses, however, is not limited to the job sectors in question. Lost wages and employment ripple through the entire economy and will reduce the income of businesses in every sector. That means that all metros, even those with more diversified economies, will struggle to deal with the fallout from the Covid-19 pandemic.

The extent of the economic losses and economic damage will be limited by the federal stimulus that was passed in late March by the federal government. The total $4 trillion fiscal and monetary stimulus includes support for unemployed workers and health care costs, grants and loans to businesses and almost unlimited quantitative easing by the Federal Reserve. The federal government will supplement state unemployment payments, paying an extra $600 per week per individual through July 31. Maximum benefits will between 90% and 130% of wages, depending on the state.

The federal support will help mitigate the lost wages of unemployed workers, and provide cash to spend, though there remains many areas of uncertainty, including: how recipients will use the payments, whether businesses can stay solvent enough to rehire workers once the quarantine ends, and how quickly the economy will rebound once the stay-at-home orders are lifted. Forecasting the outcome is difficult given the unprecedented nature of both the pandemic and the solutions being implemented.