Largest Layoffs Among Workers Who Cannot Work From Home

This labor segment is also more anxious about housing affordability compared to workers that can work from home. 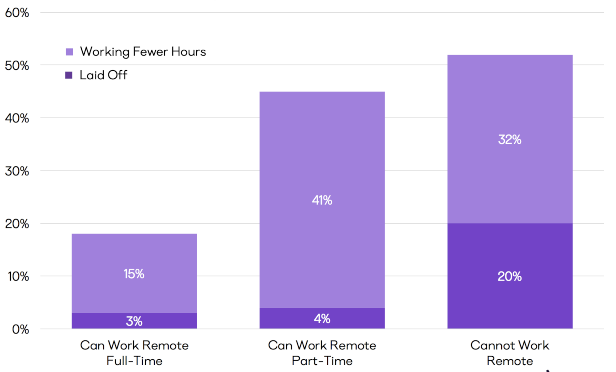 “The group that cannot work from home comprises many service-sector jobs, which in usual circumstances benefit from transferability,” Rob Warnock of Apartment List tells GlobeSt.com. “For example, if a restaurant closes, the laid-off cooks usually have many other restaurants to transfer to. But with shelter-in-place, there are few options for these workers to transfer to after getting laid off. So in the immediate-term, this is going to put a lot of pressure on government services—the most obvious example being unemployment services—while also driving down the tax revenue that the government needs to fund those services.”

This segment of workers is also more anxious about affordable housing. According to the same survey, 38% of workers in this group are concerned about making housing payments during shelter in place mandates. For property owners, this likely means that more affordable properties will see a more substantial impact, at least initially. “Class-B and C rentals are likely to be affected first, since a majority of the early layoffs are among those who cannot work from home, which tends to be a lower-income group,” says Warnock. “Higher-income renters living in class-A apartments are more likely to be able to afford housing longer.”

The survey did not cover sentiment around the CARES Act funding, which included expanded unemployment benefits. So, it is unknown if these benefits have helped to curb either anxiety about rent payments or nonpayment of rent. “That’s a great question, and we did not address the impact of the benefit expansion explicitly in our report,” says Warnock. “It would have been very interesting to see how confidence shifted before and after the CARES Act was signed. As it relates to working from home, I think the most impactful piece is the expansion to cover gig workers, who A: cannot work from home; B: have seen a general decline in demand for their work; and C: who are exposed to greater contact with others.”

These layoffs represent the initial impact to employment, but certainly not the only impact. As a recession becomes more imminent and the shelter-in-place mandates remain, more workers with the flexibility to work from home could be affected. “I think a broader recession could lead to increased layoffs even for work-from-home employees,” says Warnock. “Working from home provides some protection, but only as long as there continues to be demand for your services. The anecdote that comes to mind is Yelp, which just announced a large round of layoffs last week. Despite the company itself being very amenable to remote work, the downturn of the restaurant sector is hurting its top-line revenue and cost many remote workers their jobs.” What Trump vs. Biden Means To Investors

In the near term, controlling COVID-19 could matter more than policy.