Our hope is that funding could get out to the market within the next two months, says National Multifamily Housing Council's Kevin Donnelly.

WASHINGTON, DC—On Monday Sen. Sherrod Brown (D-Ohio) tweeted the news that he was planning to introduce a $100 billion rent relief bill, surprising many in the industry that had begun to wonder if the federal government had forgotten about them.

Even with the tweet, Washington observers could have been forgiven for feeling jaded about the measure’s prospects: Republicans and Democrats are at odds on what future federal assistance will look like while President Trump has his own ideas about what the next steps should be.

That said, industry advocates are focusing on ushering this bill, along with sister legislation underway in the House that is being sponsored by Maxine Waters (D-Calif.) and Denny Heck (D-Wash.), across the finish line. The latter should be unveiled within the next few days, according to Kevin Donnelly, VP of government affairs with the National Multifamily Housing Council.

Of the two measures, the House bill is likely to be the first to make it to the floor for a vote, Donnelly tells GlobeSt.com. Speaker of the House Nancy Pelosi has indicated that a vote could happen as soon as May 11 or so. “We are optimistic it will pass the House in some form,” Donnelly says. The fate of Brown’s bill in the Senate is less clear and it will probably take several weeks before some consensus is reached.

Here too, Donnelly believes the Senate will move forward with the bill eventually. The grim reason is that the US economy will continue to be squeezed for some time and more and more people will find themselves unable to pay their rent. “The longer the economy contracts the greater the likelihood is that this bill will be passed,” he said.

Ultimately Donnelly says, “our hope is that funding could get out to the market within the next two months.”

Once that does happen, it will be crucial that the funds will be disbursed with the greatest efficiency possible. To that end, NMHC is working with legislators to tweak some of the bills’ details.

Both measures are proposing that funding should be distributed through the Department of Housing and Urban Development’s Emergency Solutions Grant Program, which Donnelly describes as a relatively small initiative traditionally aimed at serving the homeless.

“The concern from the provider side is that pushing $100 billion through any government program will take a long time to get to the population it needs to serve,” he says. “We are very concerned about the bureaucratic layers.”

NMHC believes that in conjunction with the ESG program other HUD funding programs, such as the section 8 voucher program, can also be used to push the money out.

Timeline and Other Unknowns

Both measures have been structured as grant funding, meaning that renters will not be obligated to pay back the money.

There are some unknowns to the program, largely due to the shifting course of the pandemic’s recovery. Many health experts say Covid-19 will be circulating among US society for at least two years, with additional peak infections sending people back to their homes. For that reason, it is too hard to say how long assistance will be needed by renters, Donnelly says.

“As folks are able to resume normal work and the economy picks up, we are hopeful this can be a short and brief period that is well tailored to truly emergency assistance.”

But because no one truly knows how this will play out, the bills do not have a time limit or time cap on how long the assistance will be provided.

NMHC is also working on a separate but related lobbying initiative: an expansion of mortgage forbearance for all mortgage types including multifamily. Even though some rental income is expected to continue to flow, there will clearly be a drop, which threatens the ability of multifamily owners to make good on their own financial payments, Donnelly says.

“This is incredibly important as cities and states are imposing eviction moratoriums,” he says. “We are strongly pushing Congress to extend the existing forbearance in the CARES Act.” 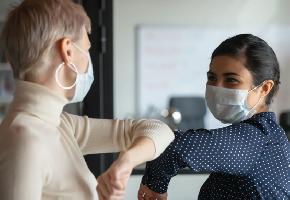 Most Workers Prefer to Work in the Office, But Need Changes Before They’re Comfortable Returning

A new Gensler report found than at least half of the 2,300-plus respondents said they’d need stronger policies against coming to work sick, increased opportunities to work from home, and an uptick in office cleaning.