In their rent payment tracker, The National Multifamily Housing Council (NMHC) found that 90% of apartment households in the U.S. made either a full or partial rent payment by August 20.

NMHC surveyed 11.4 million units of professionally managed apartment units across the country. The results from August are down 2.1% compared to July where 91.3% paid rent by July 20. Although August was down from July, it is up .8% from April, which saw the lowest dip to 89.2% of rent collected by April 20. And as seen in the figure below, in 2019, 92.1% of apartment households had paid rent by August 20.

Since the CARES Act ended in July, which authorized an additional $600 in unemployment benefits, there has been concern whether it would affect if people could pay their bills or not. The COVID-19 pandemic caused a spike in unemployment rates as businesses shut down after mandatory shelter-in-place policies occurred. Today, the unemployment rate is 10.2%, according to the U.S. Bureau of Labor Statistics.

Earlier in August, President Donald Trump passed an executive action that would provide an additional $300 in unemployment benefits. So far, 30 states have been approved for federal funds. The funds are guaranteed for three weeks, which means Congress would have to pass other legislation to extend benefits.

“Lawmakers in Congress and the Administration need to come back to the table and work together on comprehensive legislation that protects and supports tens of millions of American renters by extending unemployment benefits and providing desperately needed rental assistance,” said Doug Bibby, NMHC president. “The industry remains encouraged by the degree residents have prioritized their housing obligations so far, but each passing day means more distress for individuals and families and greater risk for the nation’s housing sector. If policymakers want to prevent a health and economic crisis from quickly evolving into a housing crisis, they should act quickly to extend financial assistance to renters.”

Rent payment data extended through the rest of the month of August will be updated on the NMHC’s website on August 31.

Carley Beckum is part of the social media team at ALM.

As the economy continues to rebound from the pandemic, the glut of available sublease space remains the biggest hurdle for the office sector’s recovery. 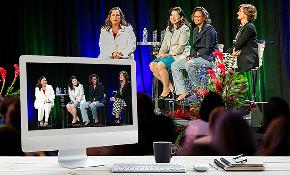 As CREW Network gears up for its convention in two weeks, it releases a white paper on why this is a critical moment to use COVID-19 as a catalyst for change in CRE.