On Aug. 4, the Treasury Department, and Internal Revenue Service (IRS) surgically nipped and tucked the regulations governing qualified opportunity zone funds (QOFs) which, while precise and limited to two specific sections, arguably results in a complete face lift to the way QOFs must operate.

By Mitchell Goldberg | August 25, 2021 at 02:16 PM | The original version of this story was published on Daily Business Review
X

On Aug. 4, the Treasury Department, and Internal Revenue Service (IRS) surgically nipped and tucked the regulations governing qualified opportunity zone funds (QOFs) which, while precise and limited to two specific sections, arguably results in a complete face lift to the way QOFs must operate. In general, a QOF is a corporation or a partnership that self-certifies to the IRS that it meets a litany of requirements set forth in the Internal Revenue Code (the code) and Treasury regulations promulgated thereunder. If the entity satisfies such requirements, it provides a taxpayer who timely invests in a QOF with two primary federal income tax benefits: such taxpayer can defer recognizing federal income tax on capital gains recognized by such taxpayer on an unrelated transaction until Dec. 31, 2025; and such taxpayer can avoid paying any federal income tax upon exiting the QOF if such taxpayer has held the investment for at least ten years. For the QOFs that are real-estate focused, these surgical cuts may jeopardize their qualifications as QOFs and the ability of taxpayers who invest in these QOFs to avail themselves of the foregoing tax benefits.

One of the many requirements to qualify as a QOF is that the QOF invests in a qualified opportunity zone business (QOZB). Among the requirements for a business to be a QOZB, at least seventy percent (or 90% in certain circumstances) of assets used by the business must be “qualified opportunity zone business property” (QOZBP) (referred to as the “Good Asset Test”) and less than 5% of the business’ assets are held in certain passive investment assets (the “Bad Asset Test”). The Good Asset Teste and Bad Asset Test are applied semi-annually. An exception to the Bad Asset Test, permitting passive assets to exceed 5%, is for reasonable working capital amounts. The IRS and Treasury Department promulgated regulations in January 2020 to clarify the application of the Bad Asset Test and working capital exception to QOFs by creating a working capital safe harbor (WCSH) specifically applicable to the opportunity zone rules. In short, where the WCSH is satisfied, cash and cash equivalents are deemed to be reasonable in amount and the business does not fail the Bad Asset Test. In addition, such regulations included a provision which (arguably) went one step further to provide that, where the WCSH is met, the Good Asset Test is also satisfied while the WCSH is in effect. However, in the haste to promulgate such regulations (together with all other regulatory packages IRS and Treasury were working on in the wake of the Tax Cuts and Jobs Act of 2017), a clear drafting error (in the form of an incorrect section cross-reference) was included in the WCSH which created some uncertainty as to when satisfying the WCSH would also satisfy the Good Asset Test.

With surgical precision, on Aug. 4, the IRS and Treasury Department rightfully corrected the section cross-reference which clarified that satisfying the WCSH would also satisfy the Good Asset Test. This was a welcomed correction by tax practitioners who had been scratching their collective heads at the drafting error. However, the correction goes on to explicitly limit the rule which deems the Good Asset Test satisfied when the WCSH is satisfied to only “start-up businesses.” The term start-up business is not defined anywhere in the code or Treasury regulations. Is the mere administrative act of forming a new entity sufficient for that entity to be considered a start-up business for purposes of the opportunity zone rules? Does an entity need to be engaged in certain activities (or not engaged in certain activities) to be considered a start-up business? Does an entity cease to be a start-up business after certain time has passed or certain events have occurred? Typically, when one thinks of a start-up business, one thinks of Steve Jobs and Stephen Wozniak tinkering away in a home garage creating Apple. Does a group of investors coming together to acquire and develop real estate constitute a start-up business as well?

Consider the following facts that are typical in South Florida. A group of investors form a new entity, elect to treat the entity as a QOF, invest $30 million into the QOF, and the QOF contributes the $30 million to newly formed partnership X in exchange for a partnership interest. On Dec. 20 of Year 1, X uses $15 million to acquire a preexisting multifamily residential property located in a qualified opportunity zone. The remaining $15 million will be used to substantially improve the property over the next 30 months. The property is leased and otherwise used in X’s trade or business on the date of acquisition. When the Good Asset Test and Bad Asset Test are applied to the QOF’s assets (i.e., its partnership interest in X) on Dec. 31, Year 1, the answer potentially turns on whether X is considered a start-up business. If X is not a start-up business, then the status of the entity as a QOF and the investors’ tax benefits under the opportunity zone rules may be in jeopardy: on Dec. 31, Year 1, the QOF would not satisfy the Good Asset Test because less only 50% of X’s assets would be QOZBP (even if the WCSH is met). Specifically, the $15 million attributable to the building would be QOZBP (since it was purchased out of assets in the WCSH and is expected to be QOZBP) but the remaining $15 million (assuming none of it has been expended), while meeting the WCSH and not violating the Bad Asset Test, would nonetheless not be considered QOZBP. Before the foregoing corrections were issued, where X satisfied the WCSH, X as a whole was deemed to satisfy the Good Asset Test for the entire time the WCSH was in effect regardless of whether or not X is considered a start-up business and, as such, the QOF would satisfy the Good Asset Test.

While the IRS and Treasury Department surgically tightened up one aspect of the opportunity zone rules, they accidentally nicked an artery. Further guidance is needed on what is and what is not considered a start-up business, particularly as it relates to real estate acquisition and development. If entities like partnership X, above, are not considered start-up businesses, it will create series timing issues for real estate developers and investors which may functionally prohibit the acquisition and substantial improvement of preexisting real estate structures from qualifying for the opportunity zone tax benefits.

Mitchell Goldberg is a partner with Berger Singerman. He focuses his practice in the areas of federal income, partnership, corporate, international and transfer taxation and related business transactional matters. Contact him at [email protected] 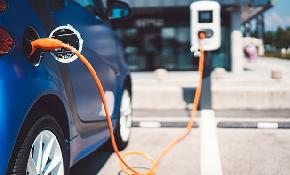