Every industry watches its younger generation for a myriad of reasons. Sometimes, as in tech, younger workers are on the leading edge of new products. In other industries, this cohort may be setting the tone and pace for future processes and ways of doing business. For many categories, the youngest entrants are an indicator of the energy entering the space. In commercial real estate, it could be said that it is a combination of all of the above. We think you will agree as you read about the achievements of this year’s selection of our 50 under 40. On the following pages you will find stories of companies formed, unique deals forged and many millions of dollars transacted.

COLIN BEHRING A third-generation developer, Colin Behring recently victoriously won a lawsuit in federal court that helped revive the EB-5 immigration investment industry, a $37 billion investment vehicle for real estate developers that has created more than 730,000 full-time jobs for American workers. This milestone represents one of many impacts that the CEO and director of investment at Behring Cos. has had during his 15-year career. Behring began his career developing real estate in Shanghai, including a $2 billion, 360-acre master-planned mega-development, while overcoming the complexities of acquiring land, land-use policy and currency exchanges in China. Behring founded Behring Capital in 2013 and under his leadership, the firm has since invested in more than $800 million of real estate and it has built a digital EB-5 investment platform that has raised more than $100 million in immigration investment capital from foreign investors. In 2015, Behring created a foreign outbound investment platform and the firm became one of the first American companies to establish within the Shanghai Free Trade Zone. The firm raised more than $50 million in Asian capital for US projects. Under Behring’s leadership, the company specializes in income-focused mixed-use and residential investments, such as transit-oriented developments and workforce and student housing projects. Behring’s most innovative venture to date is the StakSite, a forthcoming mixed-use real estate concept that will deliver apartments, flex office, amenities and vehicle-sharing in a single offering.

JUSTIN MICHAEL BRASELL Justin Michael Brasell is one of the youngest executives at Transwestern Real Estate Services, where he serves as EVP of the firm’s Houston healthcare and life sciences advisory services group. After starting his career as an intern at Transwestern during graduate school, Brasell was identified early on in his tenure for a fast-track career at the firm. In 2015, the company nominated him to lead its young professionals group. In his role as EVP, Brasell leads a 13-person team and supports development, property management, construction management, investment sales, agency leasing and tenant representation. Brasell believes in team victories versus individual achievements, and he has worked to create an environment where information and wisdom are shared and collaboration is fostered. He is known for being innovative and seeking out disruptors in the market. For instance, Brasell and his team are researching new ways to promote available space to physicians as well as new design concepts for medical office buildings that could revolutionize service delivery and patient experience. In addition to executing his ongoing responsibilities, Brasell remains one of the team’s top producers and he serves on Transwestern’s board of directors and its national technology committee. In 2020, during the pandemic, Brasell’s team focused on creative solutions and effectively onboarded more business than any other year in the team’s history. 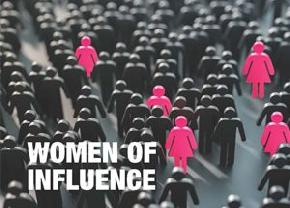 Here is our selection of nearly 300 Women of Influence for 2022.